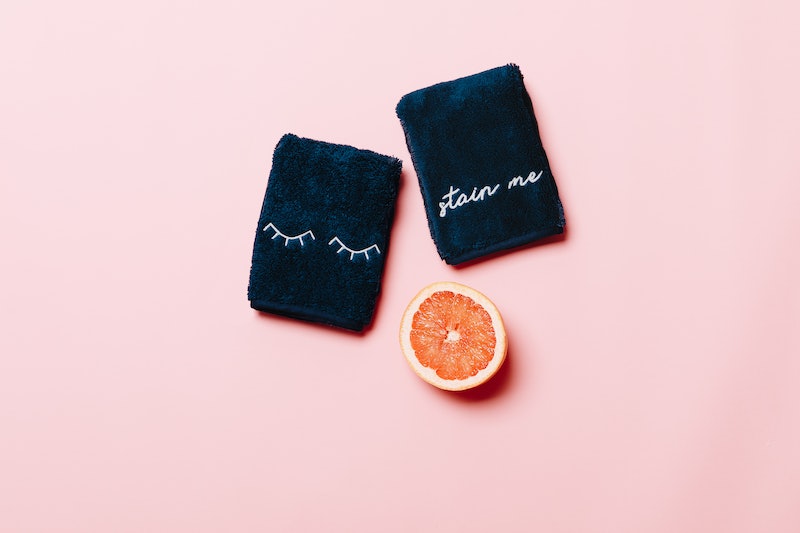 Transforming your bathroom can seem like a pretty big job. Sometimes, though, you don't need to spend a lot on fancy fixtures or a new paint job — all you need is just a few extra items to spruce things up. The right small items can make your bathroom look immediately more fresh and exciting, and it's even better when those items are useful as well. For instance: these embroidered towels from Weezie, which are so cute and customizable, they're a surefire and easy way to transform your bathroom — no joke.

Weezie is a new customizable towel line that can be purchased online. While new towels might not sound like it would make a huge change in anyone's bathroom, these towels stand out because of the unique and thoughtful way they were created. They're accessible, high-quality, and luxurious all at once, and the fact that they can be customized makes them unique to your home. Additionally, Weezie is a towel line designed specifically with millennials in mind, meaning they definitely aren't going to be boring. Bonus, the company was created by two women: friends Liz Eichholz and Lindsey Johnson. (Editor's note: Eichholz is a former employee of Bustle.)

There are a few things about these towels that make them worth ordering. The most important thing: They are super soft, but not so soft that they're no longer absorbent. Made with long staple organic cotton, they are strong, hypoallergenic, and don't produce a lot of lint. Interestingly enough, they're made with a Japanese technology that traps air in each fiber. This increases absorbency and fluffiness so that you get the best of both worlds.

Additionally, if you've always felt that the typical bath towel isn't big enough (which, let's be honest, we've all felt), you'll love these, as they're longer than the average towel. Weezie towels are also environmentally safe, and free of harmful chemicals that are often found in similar products.

They also include tiny details that set them apart from other towels. You know how you likely hang your towels from a hook to dry them, leading to the possibility that you're going to tear a hole in them? Weezie towels come with a convenient hook for more effective drying.

Additionally, while all of their towels are a crisp, sharp white color, you can add a pop of color around the border — there are five shades to choose from. You can also add your initials and choose between seven thread colors. The towels all have unique rounded edges that make them look more modern and interesting.

If you wear a lot of makeup, the idea of using pure white towels isn't too appealing (even when you scrub your face, a little makeup always seems to rub off on towels!). Weezie has thought of that too: the brand sells deep navy towels specifically made to remove makeup. The almost black shade will hide any stains until you're ready to throw them in the washing machine.

So yeah, it's a towel — but even something as small as that can change up a bathroom when it includes as many subtle, cool details and customizable features like Weezie's. The company recognizes that as millennials are getting older, they're more interested in luxury brands that aren't over-the-top expensive. These towels definitely fit the bill!