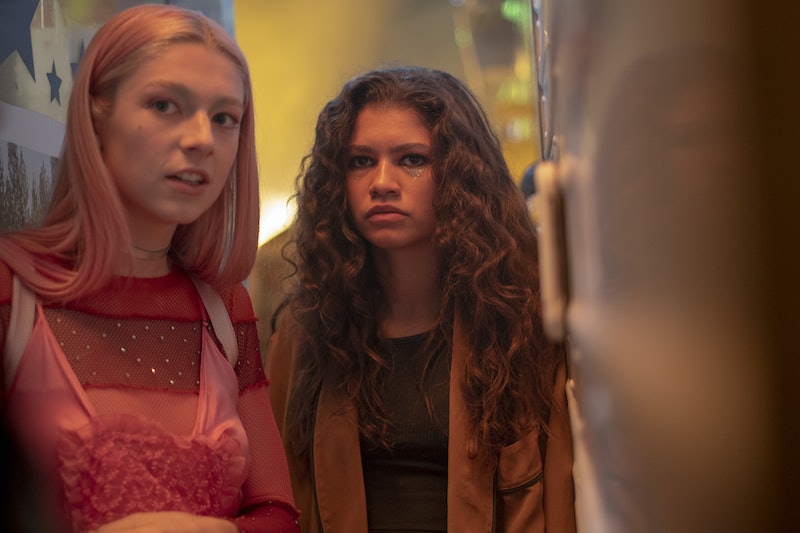 Sunday, Aug. 4 marks the first season finale of HBO's Euphoria, a dark but evocative drama examining the harsh realities of modern teenhood. According to the network, the show has garnered an average of 5.5 million viewers per episode, which is one of the many reasons it was recently renewed. So as we close out the series' first chapter, let's look ahead to everything we know about Euphoria Season 2 already.

Season 2 was officially announced on July 11 by HBO Programming's Executive Vice President Francesca Orsi. "Euphoria creator Sam Levinson has built an incredible world with an extraordinary cast led by the supremely talented Zendaya. We are so grateful that he chose HBO as the home for this groundbreaking series," she said in a statement. "We look forward to following these complex characters as their journeys continue through the challenging world they inhabit."

Though, according to HBO, Euphoria is its "youngest-skewing" series, it deals with what many would consider some adult topics including drugs, sex, identity, and trauma, much of which come to life through Zendaya's Rue Bennett and her friend Jules Vaughn, played by Hunter Schafer.

Zendaya tweeted her excitement for the show's renewal when the announcement was made. "Literally just got the call," she wrote. "Can't say thank you enough for the support we've seen, wow..."

There isn't an official Season 2 release date just yet, but it's safe to assume that Summer 2020 could bring eight more hour-long episodes. The first season capped there, so it's likely that the same short-ish format will roll over.

And those new episodes should be cherished, because Euphoria's high school-based narrative won't last forever. "Well, [the characters] are in high school, so there are only so many seasons it can go," HBO president Casey Bloys told TVLine. "There's a time limit." He added that deciding when the show will end will be a collaborative effort among the show's leadership, including series creator Sam Levinson. "We'll follow [Sam's] lead on that," he said. "There is no set plan. But I don't think you want 30 year olds playing [high school students]."

Drake also contributed to Season 1 as an executive producer, and announced the renewal on his personal social media. "Euphoria picked up for Season 2," he wrote on Instagram. "OBVIOUSLYYYYYYYYY." That all-caps excitement could mean he plans to sit behind the cameras once again — perhaps even in the director's chair this time around.

For some viewers, the show's intense and sometimes graphic content has been a bit shocking, given its young characters. But Zendaya, who is 22, told IndieWire the storylines are more representative of real teenage life than some people realize. "It's only shocking if it's maybe not your personal experience," she said. "Maybe you had a different path and you never met anyone who went through any of that — but I highly doubt it."

Considering how many powerful topics Euphoria already covered in Season 1, Season 2 could get even deeper — and darker.

More like this
Everything To Know About 'Only Murders In The Building' Season 3
By Gretchen Smail and Kadin Burnett
A New 'And Just Like That' Table Read Pic Confirms A Key Character's Return
By Jack Irvin and Grace Wehniainen
'The Rig's Explosive Finale Leaves Fans On Tenterhooks
By Maxine Harrison
You’ll Definitely Recognise 'Doctor Who's New Cast Member Aneurin Barnard
By El Hunt
Get Even More From Bustle — Sign Up For The Newsletter
From hair trends to relationship advice, our daily newsletter has everything you need to sound like a person who’s on TikTok, even if you aren’t.