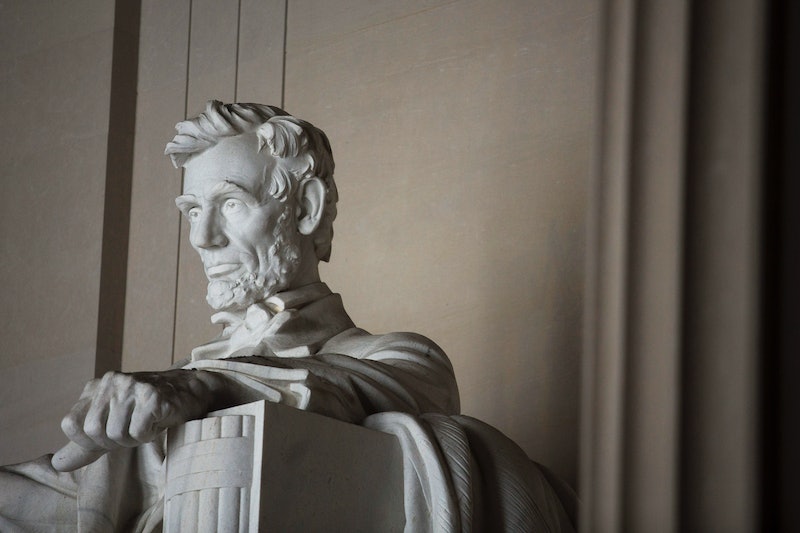 It's nice to be remembered on your birthday. Unless, of course, you're being wildly misrepresented in an attempt to promote a political agenda. Case in point, the Republican National Committee sought to celebrate what would have been Abraham Lincoln's 208th birthday Sunday with a tweet referencing the former president's inspiring words. The problem? There's no evidence Lincoln ever said what the GOP attributed to him. Yikes. Never ones to miss such a meme-worthy opportunity, Twitter users responded to the GOP's gaffe by rolling out dozens of fake Lincoln quotes.

In a tweet published Sunday, the Republican National Committee attributed the following quote to President Lincoln: "And in the end, it's not the years in your life that count. It's the life in your years." The quote was superimposed over an image of the Lincoln Memorial at the National Mall in Washington, D.C., and posted along with the message, "His leadership brought us together; his legacy inspires us still. Happy Birthday, President Lincoln!"

However, Quote Investigator, a website dedicated to investigating the historical truth of famous quotations, there is "no substantive evidence that Lincoln used the expression." In fact, according to Quote Investigator, the earliest use of the quote occurred in the Chicago Tribune in 1947, some 82 years after Lincoln's death. Research into the quote's history credits it tentatively to Edward J. Steiglitz, as it was used in an advertisement for a book he authored.

A Wizard Is Never Late

Before Lincoln found a political solution to ending slavery, he'd tried a more hands on approach.

If You Come At The King

Surely the GOP has someone who could have fact checked that tweet before it went live?

Never Gonna Give You Up

Were these Lincoln's last words? Probably not, but does that even really matter?

When You're A Star

It might not have been Lincoln who said these famous words, but it was a U.S. president.

Don't Believe Everything You See On The Internet

The GOP might consider letting this fake Lincoln quote inspire their next course of action.