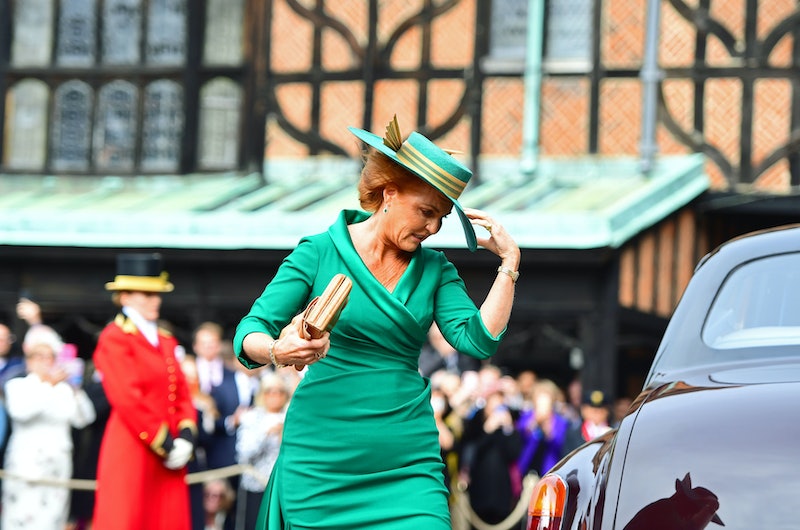 There have been plenty of iconic takeaways from each of the royal weddings throughout history: Princess Diana's "revenge dress", Kate Middleton's fed up flower girl, Harry and Meghan's extremely rapturous preacher. Now, hardly any time into it at all, the ultimate iconic moment of Princess Eugenie and Jack Brooksbank's wedding has already been sealed. In our age of memes, things get picked up on pretty quickly, and you can bet that people everywhere will be talking about the flying hat memes from Eugenie's wedding.

In this day and age, you just can't avoid something turning into a meme at a major public event. The hatters are gonna hat, and at Princess Eugenie and Jack Brooksbank's wedding, the headwear was seriously misbehaving. And while you'll still hear the cheers of a "hip, hip BERET!" for the wedding guests, they might sound a bit drowned out while the internet erupts into laughter and memes, as the windy day was causing the guests' hats to fall off.

Unfortunately for the bride and groom, their wedding day happened to coincide during the throes of Storm Callum. It wasn't a particularly threatening storm, but the wind did cause people's hats to fly far off their heads.

The Express reported that gusts were reaching around 60mph at the wedding, which was bad news for the guests, but hysterical to everyone watching. And of course, the embodiment of extra, Naomi Campbell was wearing the "tallest and fanciest" hat, as Elle reported, but that one stayed put (just about).

Though, unfortunately for another guest, one black fascinator did manage to escape, as that person was seen scrambling after it in the wedding's most heroic moment so far, as Nine Honey reported earlier.

And Fergie herself was pretty close to losing her headwear to the wind, in what's now being referred to as the "quidditch hat", The Mirror reports. As you can imagine, Twitter had some real fun with that one. Buzzfeed UK captured all of those relatable feels, when they tweeted a photo of the now notorious hat and captioned it: "When you've caught the snitch at the Royal Quidditch Game and you have to show off by putting it on your hat". While another user tweeted: "Fergie’s hat looks like something Luna Lovegood would wear to a quidditch match."

Another user captured the glorious moment when a black hat fell from another head, while a guest fruitlessly tried chasing it down the road. "Best moment of the royal wedding so far," the user tweeted. Parody account "Stansaid Airport" also laid into Fergie's hat: "I'm not saying Sarah Ferguson's hat is weird, but Kev in Air Traffic has just cleared her for take off," they tweeted. But another user thought it looked a bit more delicious. "Anyone else want a Quality Street now?" they captioned above a photo of Fergie's hat. And all of this Fergieness has got Twitter nostalgic. Another parody account, "Classic Pics", tweeted this absolute gem that I'll leave you with. It's uncanny, right?