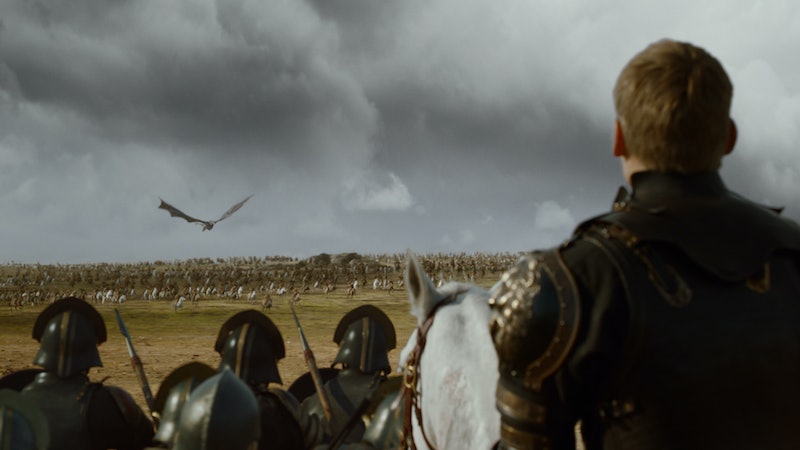 Whether you were rooting for Daenerys or Jamie during the fight against the Lannisters and the Dothraki, no one could've expected the sheer destruction that battling a dragon brought onto the field of Westeros. The Lannister army went up in flames, and even Daenerys' allies were in horror at the carnage. Dany has proved that one dragon is powerful. But what about two or three dragons? Surely nothing can stop three fire-breathing dragons? Dragons may seem unstoppable, but if these ice dragon theories for Game of Thrones are to be believed, then Dany's quest for the Iron Throne may not be as easy as she imagines.

Picture Rhaegal, Viserion, or Drogon but with a cool twist. That's an ice dragon. Even for a show as fantastical as Game of Thrones, the concept of an ice-breathing dragon may seem far out. However, fans of the show have been pouring over the Game of Thrones books and believe that the final moments of Game of Thrones may reveal a beast more powerful than anyone could have imagined. But would it be powerful enough to possibly stop Dany's trio of dragons from sacking Westeros?

It is easy to assume that ice dragons are one step too far for Game of Thrones. The most supernatural elements of this show, including regular dragons and white walkers, have been mentioned since the very beginning. But, Game of Thrones is also the same show that impregnated a woman with a shadow baby assassin, so maybe ice dragons aren't a crazy idea.

Besides, the existence of ice dragons in Westeros is already confirmed by the World Of Ice And Fire book. As the book describes:

Colossal beasts ... said to be made of living ice, with eyes of pale blue crystal and vast translucent wings through which the moon and stars can be glimpsed as they wheel across the sky. Whereas common dragons (if any dragon can truly be said to be common) breathe flame, ice dragons supposedly breathe cold, a chill so terrible that it can freeze a man solid in half a heartbeat.

One theory is that Jon will live up to the his role in the Song of Ice and Fire and ride an ice dragon alongside Dany. Some even theorize that an ice dragon is frozen into The Wall, inspired by how frequently Jon compares The Wall to an icy dragon in the books. Between those comparisons, the stories about an ice dragon that Old Nan told Jon as a child, and the fact that Jon riding on an ice dragon is the coolest thing imaginable, it seems like the books, at least, are heading towards Jon riding an ice dragon.

Another theory takes a more pessimistic view of how an ice dragon could appear and possibly destroy our Westeros' armies in one fell swoop. The Night King's powers of resurrection have long been a source of terror for Jon Snow and others who bore witness to the army of the dead. The Night King has proven that he can turn Giants into wights, but what about dragons? Some fans suspect that one of Dany's dragons will die and be turned by The Night King into a dragon of ice. We've seen that a well-placed spear could injure a dragon enough to bring it to the ground, but if The Night King finds a way to kill it and reanimate it — that could be game over for Westeros. Killing a dragon is no easy feat, but trying to down an undead one could be impossible.

If an Ice Dragon does turn up in Season 7 — Jon, Dany, and every living thing in Westeros better pray that it's on their side. If The Night King is seen riding atop an ice dragon, then The War For The Dawn is going to be more brutal than anyone could've imagined.