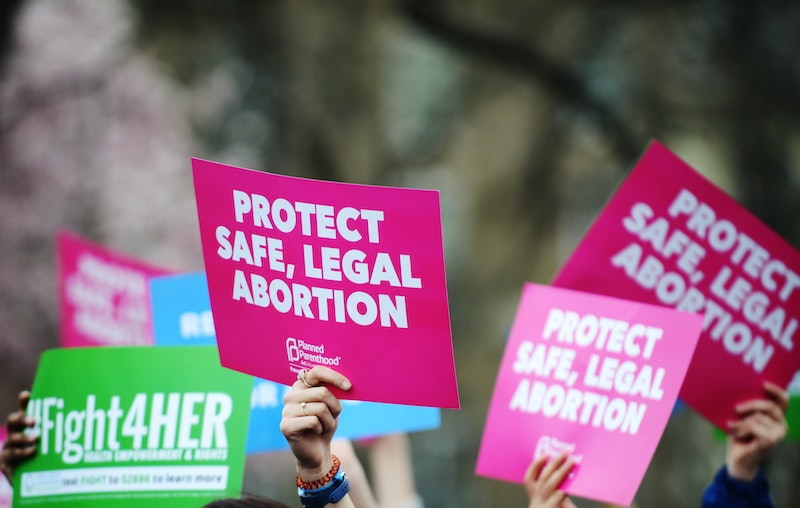 The paper reports that a handful of district attorneys near Atlanta have promised not to press charges against people who seek an abortion after a so-called "fetal heartbeat" is detectable. Georgia recently passed a law that will ban abortions at that point, which for most pregnant people is around six weeks gestation. Many do not even know that they are pregnant that point, according to The New York Times. The law is slated to go into effect next year.

"As a woman and mother, I am concerned about the passage and attempted passage of laws such as this one in Georgia, Alabama, and other states,” Dekalb County District Attorney Sherry Boston said in a statement provided to 11 Alive News. “I believe it is a woman’s right to make decisions regarding her own body and medical care, including, but not limited to, seeking an abortion, as upheld by the United States Supreme Court."

She noted that the Georgia law did not specifically say that people couldn't be prosecuted for seeking an illegal abortion. She said that "as District Attorney with charging discretion, I will not prosecute individuals pursuant to HB 481 given its ambiguity and constitutional concerns."

Boston was far from the only Georgia district attorney to issue similar remarks. Both Fulton and Gwinnett county district attorneys said that they do not plan to prosecute any people under the new law, and that instead they will stick to the precedent set by Roe v. Wade, per 11 Alive News.

"In terms of the what seem to be the most pressing questions, I believe that under the current law it is not possible to prosecute a woman who has an abortion even if it is self-induced for either Murder or Unlawful Abortion," Gwinnett County district attorney Danny Porter told the publication. "Therefore as a matter of law (as opposed to politics) this office will not be prosecuting any women under the new law as long as I’m District Attorney."

Barring any potential injunctions, the new law is scheduled to go into effect on Jan. 1, 2020. The law will undoubtedly face legal challenges in the coming months. The Center for Reproductive Rights, in particular, immediately promised to file a lawsuit after the law was signed.

“This law is bafflingly unconstitutional. Bans like this have always been blocked by courts," the center's chief counsel, Elisabeth Smith, said in a statement. "We will be suing Georgia to make sure this law has the same fate."

Georgia is one of several states to pass or push forward anti-abortion legislation in recent months. But if the state's district attorneys are any indication, the restrictive ban will face opposition not only from advocates, but from inside the local legal system, as well.

"This law obviously sets out to criminalize abortion in the State of Georgia," Boston said in her statement. "The question is — who will be held criminally responsible? The law, as written, is either silent or ambiguous, at best, on this question."

More like this
Amanda Gorman Shared A Powerful Message On Meghan Markle’s Penultimate Podcast
By Darshita Goyal
Prince William Condemns “Unacceptable” Comments Made To A Black Guest At Buckingham Palace
By Shahed Ezaydi
The David Beckham Qatar Controversy, Explained
By Sophie McEvoy
Claire Foy & Rooney Mara Revisit A Devastating Tale In 'Women Talking'
By Bustle UK
Get Even More From Bustle — Sign Up For The Newsletter