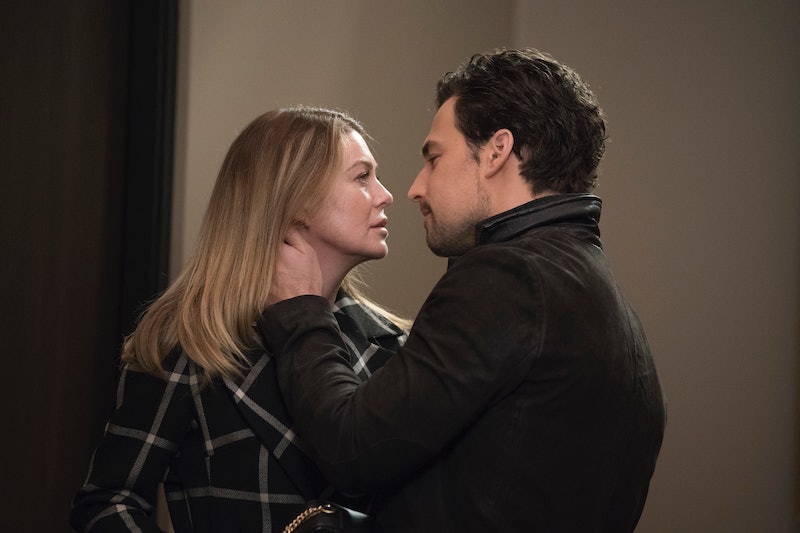 The cast of Grey's Anatomy is scrubbing back in for a brand new season of drama, surgeries, and even a little romance. Now that production is officially underway, Ellen Pompeo and Giacomo Gianniotti have taken the liberty of providing the first Grey's Anatomy Season 16 set photos for fans to enjoy. However, these aren't just any random images. They indicate a very crucial plot point: that Meredith and DeLuca's relationship is still going strong.

On Monday, July 29, Pompeo posted a video on her Instagram story, which shows Gianniotti enjoying some delicious ice cream while lounging on a very comfortable looking bed. In fact, that bed looks a little familiar — like the one that belongs to Meredith. "This is my first scene of season 16 eating ice cream in bed with @giacomo_gianniotti and I get paid?? #shondalandproblems," the Grey's star wrote alongside the video. That definitely bodes well for MerLuca supporters, who may have been worried about what their future would hold now that they've both been fired over the insurance fraud scandal, which came to light at the end of Season 15. DeLuca had initially taken the fall for the crime, but Mer ultimately went to the police to clear him of the charges shortly thereafter.

Luckily, the drama hasn't seemed to hurt their romance in any way, so while their career ambitions may be in limbo, they at least have each other — and ice cream.

Not to be outdone, Gianniotti also posted an adorable selfie on his own Instagram account of both him and Pompeo looking pretty cozy together. He also made sure to include some rather interesting hashtags for fans to enjoy and ponder over. "First day back at work with this beauty! @ellenpompeo," he wrote. "Season 16 of @greysabc here we go! #greysanatomy #greysisbackbaby #pajamadayeveryday #icecreamforbreakfast"

Sentiments like "pajama day every day" and "ice cream for breakfast" definitely hints at the marks of unemployment, but at least they have each other to lean on during these difficult times. And who doesn't love a pajama party with the people you love most? It's worth noting, however, that DeLuca appears to be wearing scrubs in this image while Meredith doesn't. Could this mean he finds his way back to the hospital sooner than some of the others?

Executive producer Krista Vernoff hinted during a recent interview with TVLine that fans shouldn't expect to see this employment problem get resolved right away. "It was a big swing we took, and I can't promise that Grey Sloan isn't going to have to do without those doctors, at least for a while," she teased. "I mean, they got fired!"

Thankfully, Grey's Anatomy was granted a two-season renewal in May, which means there's still plenty of time to tell these characters' stories and get Mer, DeLuca, Richard, and Alex back to Grey Sloan where they belong. Perhaps in the meantime, though, Richard and Alex can join in on the pj and ice cream fun until that day finally arrives.

More like this
The 'Bachelor In Paradise' Schedule Shifts To 4 Hours Every Week After The Season 8 Premiere
By Brad Witter
The New Bachelor Will Be Announced Next Week & Here Are The Top Contenders
By Grace Wehniainen
Nicola Coughlan Shared A Lady Whistledown Excerpt From ‘Bridgerton’ Season 3
By Grace Wehniainen, Alyssa Lapid and Sam Ramsden
The 'Andor' Timeline, Explained
By Gretchen Smail
Get Even More From Bustle — Sign Up For The Newsletter