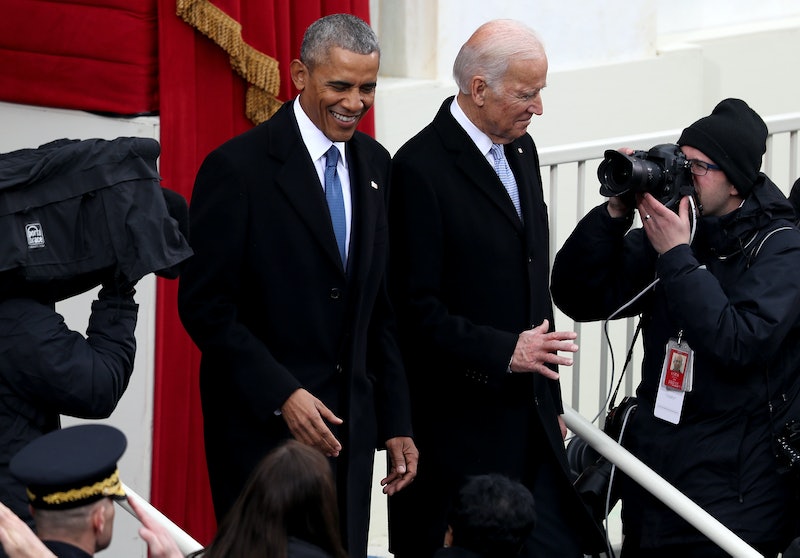 In the weeks leading up to Barack Obama's departure from the White House, he and Joe Biden once again became the subjects of some hilarious memes. Most of these memes involved Biden plotting to make Donald Trump's new life as president as irksome as possible while Obama looked on, exasperated but amused. On Friday, as Obama and Biden left the White House for the final time as president and vice president, social media users created even more such memes to elaborately speculate on what the two men were saying to each other.

There were a number of theories, ranging from Biden preparing to single-handedly take on Trump and Mike Pence to Obama learning about Biden's final plot against the Trump administration. No matter what theory they presented, these memes appeared to serve as a source of comfort. For many, the image of Obama and Biden leaving the White House was an emotional one, with a resounding sense of finality, and creating memes of the moment seemed like the perfect response.

The Obama-Biden bromance may have left the building, but it certainly hasn't come to a close. As the following tweets and memes demonstrate, nobody is quite ready to say goodbye to this meme-tastic duo.

In meme-Biden's theoretical last act as vice president, he satirizes Trump's allegedly close ties with Russia while also making the inauguration both complicated and amusing.

Biden may be a clever plotter in the world of memes, but sometimes, it's best to just face a problem head-on.

In Biden's case, that might mean pushing Trump and Pence off the platform at the inauguration before they can carry out any of their frightening plans.

Are you sure, Obama? Who knows what would have happened if you agreed to hide out in the White House and refused to leave?

"Thanks, Obama" And Other Miscellaneous Memes

Here we see a truly sincere and not-at-all ironic use of the common phrase, "Thanks, Obama," and it reminds us just how bromantic these two can be.

Biden is not ready to let go, and neither are the thousands of people who love to make memes about him.

Biden always has Obama's back, even after they've left the White House.

Can't you just see it? Obama tripping over a rope, perhaps, or accidentally sending a bowling ball flying as he and Biden walk out of the White House?

Meme-Biden has reminded all of us that we do not need to apologize for resisting a Trump administration — even if that resistance comes in the form of preventing Trump from moving into the White House.

It is unlikely that we will see such a meme-worthy pair in the White House for some time to come, so let's find comfort in these ones as we prepare to confront the Trump administration.