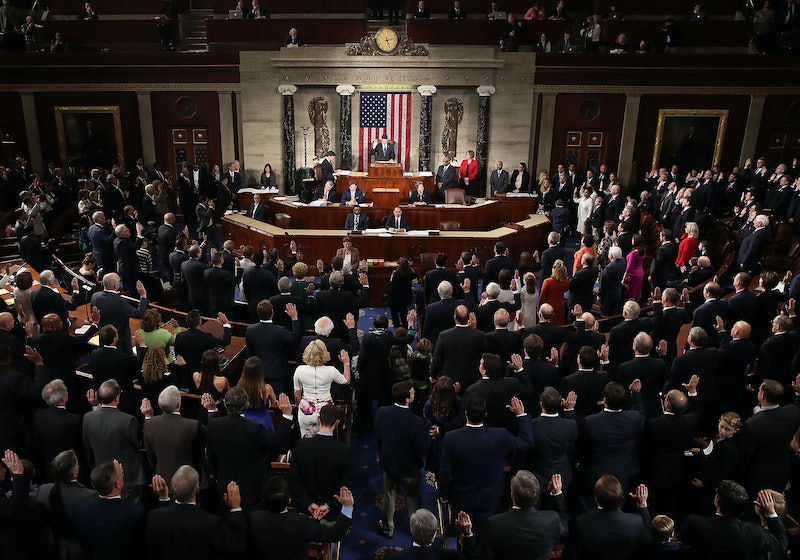 With Republicans controlling the Senate, the House of Representatives, and the White House, elected Democrats don't have that many options for taking a stand against President Trump. Nevertheless, a handful of them have come up with a clever way of doing so. In order to highlight the negative effects of Trump's immigration policies, several Congressional Democrats will be bringing immigrants to President Trump's congressional address on Tuesday, CNN reported.

New York Rep. Nydia Velazquez says that she plans to bring Hameed Darweesh, an Iraqi who was detained for 18 hours at John F. Kennedy International Airport in January because of the travel ban. Prior to his detainment, Darweesh worked as a translator for the U.S. Army, and was part of a class-action lawsuit that resulted in a court placing an injunction against the travel ban.

Sen. Dick Durbin of Illinois will bring Aaima Sayed, a medical student who was granted temporary amnesty in the United States under President Obama's DACA program, which Trump plans to eliminate.

New Mexico Rep. Michelle Lujan Grisham, chair of the Congressional Hispanic Caucus, says that a member of the caucus will bring a green card holder from Sudan, one of the countries named in Trump's travel ban.

All of these immigrants are folks who a) would be negatively impacted by Trump's executive order, and b) are self-evidently not the people who should be prioritized for deportation or detainment. By bringing them to Trump's address, Democrats are sending a clear message: Trump's immigration policies are not only inhumane and discriminatory; they're counterproductive and misguided, too. If you're going to detain an Iraqi immigrant at the airport due to "security concerns," you probably shouldn't target a guy who worked with the American military.

Grisham wrote to the president in a joint letter with five of her House colleagues:

Instead of building on the strengths of our nation and uniting us, your words and actions are tearing us apart. Our guests and I will stand as proud symbols of the rich diversity and unity that has for generations added to the legacy of America's promise.

If the president attempts to defend his immigration policy on the grounds that it protects America from dangerous terrorists, you can bet at least one news station carrying the address will cut to an image of one of the eminently harmless immigrants in the audience. Trump probably knows this, and it will be very interesting to see if the presence of these folks will affect the content of his speech. And if not, Trump will be forced to condemn them to their faces — something that, for all of his bluster, he's been able to avoid so far.

In a stark contrast to the Democrats' approach, Republican Rep. Louie Gohmert will bring Sean Hannity as his guest to Trump's address.