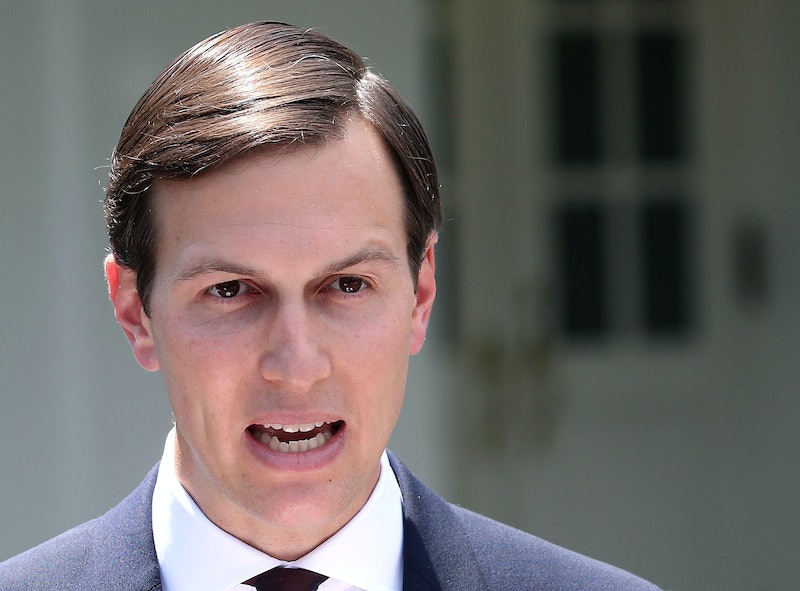 On Monday, Jared Kushner insisted he did not collude with Russia during the 2016 presidential race in a televised reiteration of his written statement. Donald Trump's son-in-law keeps one of the lowest profiles among those close to the president, making his brief television appearance a rare occurrence. And the internet did not let the opportunity to make comedy out of the situation go to waste — moments after Kushner's roughly three-minute on-camera stint, memes and jokes about Kushner were spreading and multiplying throughout social media.

Kushner delivered his statement formally dressed, as expected, but many found his appearance and composure reminiscent of an uptight student addicted to authority and trampling on those below him in rank. Photos of Kushner's tortured-looking expressions also sparked derision toward his privilege and "whininess."

In April, John Oliver highlighted Kushner's tendency to lay low by asking if anybody had ever heard the president's son-in-law speak.

For someone with the amount of power that [Kushner] has, have you ever heard him speak? Seriously, what does his voice sound like? You don’t know, do you?

In June, when Kushner gave a speech at the White House celebrating Technology Week, the internet collectively lost its mind over the sound of his voice.

Check out how some are reacting to Kushner's latest public appearance.

2. The Kid Nobody Liked At School

7. He Does Look Like The Type To Say This

8. When You're Too Motivational

9. This Would Be Embarrassing

10. It Goes So Well With Song Lyrics

11. Somebody Make This Happen

12. Right Out Of High School

15. Nobody Is That Naive, Jared

23. So That's Where Those Chills Came From

Kushner had a closed-door meeting with the Senate Intelligence Committee on Monday prior stepping out and addressing the American public on television. On Tuesday, he will be doing the same with the House Intelligence Committee. The president's son-in-law was not put under oath for his Monday conversation, and will also not testify under oath for his Tuesday meeting.