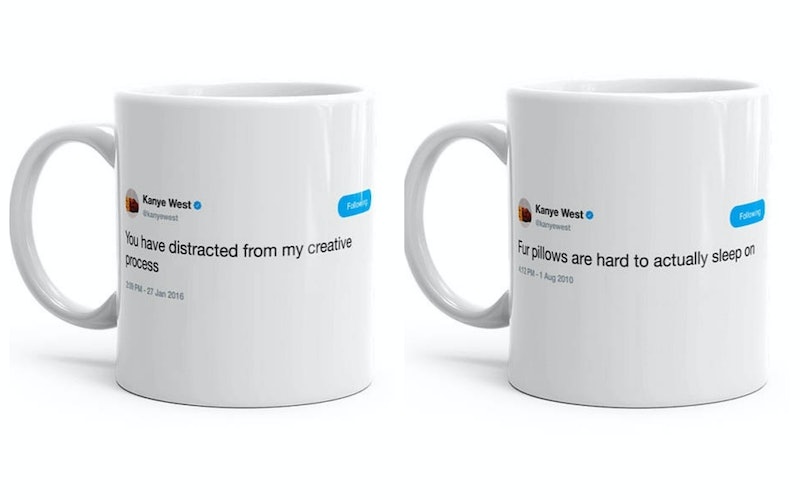 Kanye West is, of course, one of the world's deftest wielders of 140 characters, though unfortunately he keeps deleting his account, thereby depriving the public of his truncated wisdom. But it was Kanye West who brought us nuggets for thought like, "I’M SO HYPE RIGHT NOW EVERYTHING HAS CHANGED … HAVE YA’LL EVER SEEN TRON? THE END OF THE TRON WHERE EVERYTHING LIGHT UP!!!!" and "F**k any game company that puts in-app purchases on kids games!!" and "I hate when I'm on a flight and I wake up with a water bottle next to me like oh great now I gotta be responsible for this water bottle."

West also used his account for business transactions, like the time he tweeted, "Mark Zuckerberg invest 1 billion dollars into Kanye West ideas" (looking back on it, it's probably good Zuck didn't take him up on that), and for public apologies, like the time he tweeted, "I would like to publicly apologize to Beck, I’m sorry Beck," and then immediately followed up with, "I also want to publicly apologize to Bruno Mars, I used to hate on him but I really respect what he does as an artist."

West is too busy being a parent and working on his clothing line to tweet these days, but Etsy seller ConfirmedWavy has thankfully saved some of his best offerings and, even better, compiled them on mugs. For $16.99 (plus shipping), you can sip your morning coffee while contemplating whether or not Kanye has managed to recapture his creative process, without the distraction of the Twitterati:

Or if he's finally swapped out the fur pillows for a more breathable hypoallergenic down alternative:

Unwind at the end of your work day with a lovely cup of chamomile and a copy of The Life of Pablo, knowing that lots of hard work went into the track "Wolves," and Kanye wanted people to know it.

Are you a boss? Stock your office with these babies, so every employee knows they're expected to stay on their toes around the clock.

Kanye, I too get emotional over fonts, especially when the font is Helvetica, and I'm thinking about it while drinking a steaming chai I steeped myself.

I have been told, in several office and living situations, that the coffee I make is way too strong. This is because most people brew weak swill, and I refuse to spend the day keeled over a keyboard because I can't get enough caffeine in my system thanks to the incompetence of others. So to the weak-stomached among us who can't handle my coffee, I say:

And, of course, there's Kanye's best tweet, one that encompasses all that is stressful about air travel, minus going through security/having someone sit on you/fighting over the armrests in the middle seat/really everything about flying. Indeed, Kanye is the great equalizer, reminding one and all that whether you sit in first class or economy, no one is safe from the scourge of an errant water bottle, and this is something to remember on a plane or in your kitchen.

Kanye, please come back to Twitter! We need you!