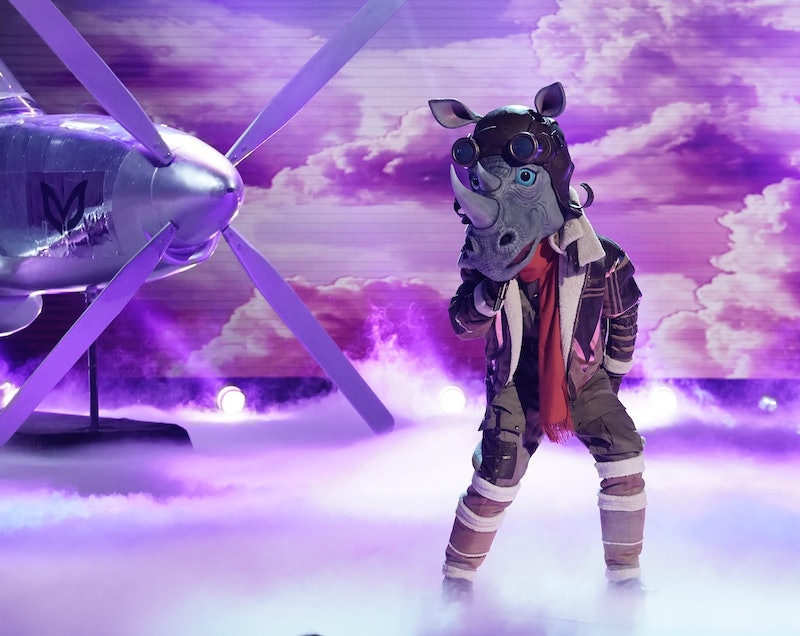 Michael Becker/FOX
By Allyson Koerner
May 6, 2020

The third season of The Masked Singer is quickly winding down, but there are still many Masked Singer Rhino theories to sort through. out of all the final five performers this season, he's the one that continues to perplex the audience and judges. Just when viewers think they know who is behind the Rhino mask, his clues confuse them even further. Well, there are plenty of theories about the Rhino that point to several famous musicians, specifically country singers (and one who was a former athlete).

So far, the judges have guessed a range of celebrities, including Tim Tebow, Ryan Lochte, David Hasselhoff, Jonathan Scott, Gavin DeGraw, and even Chris Pratt. But, there are a few other theories that fans have been tweeting about for awhile now that seem likelier than any of these guesses. The frontrunner is Barry Zito, a country singer and former professional baseball player for the Oakland A's.

Most of the clues point Zito's way. Even Jenny McCarthy recently guessed him. First, Rhino was referred to as a "gentle giant" — Zito played for the San Francisco Giants. Then, there was another clue of "performing for a king being in your blood," which could be a reference to Zito's father, Joe Zito, who made music with Nat King Cole according to The New York Times.

If that isn't enough, there were butterflies in one clue package that could symbolize Zito's song "Butterflies," which he co-wrote for the 2012 film A Thousand Words starring Eddie Murphy and Kerry Washington. It also seems like Zito's wife, Amber Seyer, was alluded to in one clue package, when the state of Missouri was highlighted with a crown on top of it. Seyer was once Miss Missouri.

But, some viewers aren't convinced Zito is wearing the Rhino mask. A few fans think the Rhino sounds like Sam Hunt, but the clues don't exactly line up, including the fact that Rhino has kids and Hunt does not. There are others, like @astoldbytvy, who think Tim McGraw could be the Rhino. "The Rhino is Tim McGraw. His name is Samuel McGraw... Spaghetti and Meatballs... There ya go,"@astoldbytvy tweeted after Rhino showcased spaghetti and meatballs in a special episode guest judged by Gordon Ramsey.

Another top theory is that singer Andy Grammer is the Rhino. As @RealSeanatello tweeted in relation to the Missouri clue, "Rhino is Andy Grammer. In 2015 he sang the national anthem at the Mets/KANSAS CITY Royals World Series game. There's the connection to Missouri. Boom there you have it." This theory is also supported by fans who are convinced that Rhino sounds like Grammer.

Another popular guess is Tyler Hubbard from Florida Georgia Line. As Twitter user @TrishHrytsak pointed out, one of Rhino's clue, a house, could hint at Florida Georgia Line's restaurant and bar named FGL: House. Plus, his fans think the Rhino sounds just like Hubbard.

So, basically, fans are convinced that the Rhino is either a country artist or a professional athlete turned country artist. Whoever the Rhino is, he might just be the most confusing Masked Singer contestant yet.