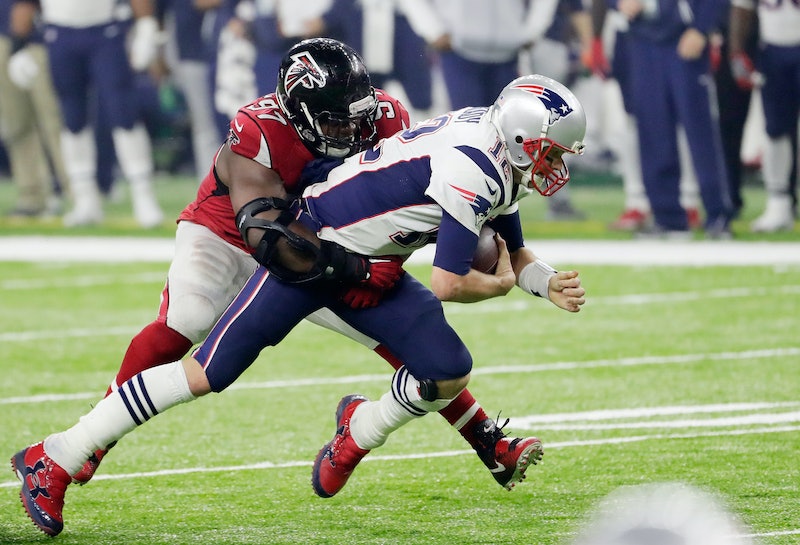 On Sunday, the New England Patriots beat the Atlanta Falcons in Super Bowl LI in Houston, Texas. After weeks of political chaos and uneasiness across the country, there was nothing like the biggest football game of the year to bring a few hours of peace and quiet. Things didn't stay quiet for long, though, as memes about the Falcons losing the Super Bowl kept social media users active throughout the night.

The Falcons, who came into Sunday's game as the underdogs, dominated much of the game. At halftime, they led the Patriots by 18 points, scoring three touchdowns before the Patriots could make their way to the end zone. The second half seemed more even, with the Patriots tying the game shortly before the fourth quarter wound down, leading to the first overtime ever played in a Super Bowl.

The comeback clearly left quite the impression.

First Half Vs. Second Half

This one goes out to all the Snapchatters who filtered too soon.

It's never good when this DJ Khaled line applies to your situation.

Ruthless, I tell you. Ruthless.

It's a sad, sad night in Atlanta.

When in doubt, ask Steve Harvey.

Was it the refs? The drones? The halftime show?

You heard him: The Falcons won!

TBH, this was the only memorable Super Bowl commercial.

The Falcons were so close — yet so far.

These are the times Drake's songs were made for.

I'm pretty sure even Patriots fans saw that going differently.

Well, this is awkward.

There's always next year, Falcons fans. Then, you'll be in a brand new stadium, too.

Finally, let this totally adorable mom cheer you up!

Although they didn't finish the game with a win, the Falcons had a remarkable season. Standouts like Ryan, wide receiver Julio Jones, and outside linebacker Vic Beasley, Jr. aren't going to be forgotten in the off-season.