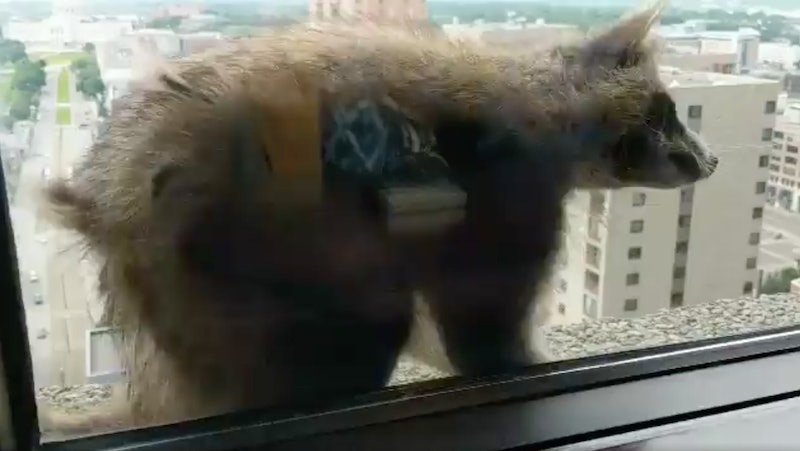 Urban critters have proven themselves adaptable to human environments, but one raccoon's vertical journey showed a whole new comfort with city landscapes. The world watched on Wednesday as photos of the MPR raccoon documented one Minnesota critter's skyscraper climb — a total of 25 floors to the top.

The raccoon was first seen Tuesday morning, perched a few stories up on the UBS building in downtown St. Paul. Rescue workers tried to urge the raccoon down with the assistance of what looked like a giant squeegee. But that just sent the raccoon skittering away — and subsequently, climbing.

Tim Nelson, a reporter with Minnesota Public Radio, began live-tweeting updates on the raccoon's status, as the critter began scaling the high-rise building throughout the day. By nightfall, the hashtag #mprraccoon was trending on Twitter, with people around the world watching, captivated by the the raccoon skyward journey.

Because none of the windows in the UBS building are equipped to open, options for rescuing the raccoon were scant. Raccoon well-wishers were ultimately left to simply hope that the scrappy animal either made it to the rooftop or somehow scaled down.

And early Wednesday morning, the raccoon did indeed reach the top of the building, where animal rescue workers awaited with cat food. But not before an array of dizzying photos and videos captured the raccoon's 90-degree climb.

When A Raccoon Naps On Your Work Window.

Even skyscraper-scaling raccoons don't stop the workday. So plenty of people who work in the UBS building snapped photos on Tuesday. Some of them even unwittingly made it into the pics themselves, like the woman who appears in the background of this photo from MPR weekend editor Andrew Krueger.

Stopping For A Scratch At 23 Stories Up.

Nelson tweeted a short video on Tuesday afternoon that showed the raccoon scratching itself — or, "grooming" — while casually chilling on the ledge of 23rd story window.

Lawyers Who Love The Raccoon.

The Paige Donnelly Law Firm, with offices in the UBS building, appeared to open a Twitter account for the explicit purpose of posting photos of the raccoon. As the page's author wrote, "We all just have to keep our fingers crossed" in hoping the raccoon made it to safety.

Sighting the raccoon clinging to the surface of the UBS building — hanging on at well over 200 feet above ground — gives a small sense of just how stunning the creature's feat was.

Raccoon On The Move.

A Twitter user who goes by Ben tweeted a photo of the raccoon as it climbed past his 13th floor window. "Hope he makes it down OK!" he tweeted. The raccoon looks totally unfazed by the height at which he finds himself, and equally unflustered at the 90-degree angle he's climbing.

Nelson tweeted an adorable photo of the raccoon taking a power nap on the slim ledge of the 21st story. "Would you be this relaxed after climbing 21 stories up the outside of an office tower?" Nelson asked. Few humans could answer yes to that question. But this raccoon is just chilling, no problem.

Raccoon Climber Brings It Home For The Win

In the early morning hours on Wednesday, the raccoon crawled his way up to safety on the UBS building's roof. Video of his successful ascent was captured by KARE 11 News, and subsequently shared on Instagram by the account @numansquared.

At one point in his journey, after the sun had set in St. Paul, the raccoon began climbing down a few stories. But it wasn't too long before the critter changed his mind and headed once more towards the roof.

The residents of St. Paul, Minnesota, the United States, and untold numbers from around the world, all celebrated the intrepid raccoon climber's extraordinary victory. It's not every day a wild creature shimmies up all 25 stories of a city skyscraper.