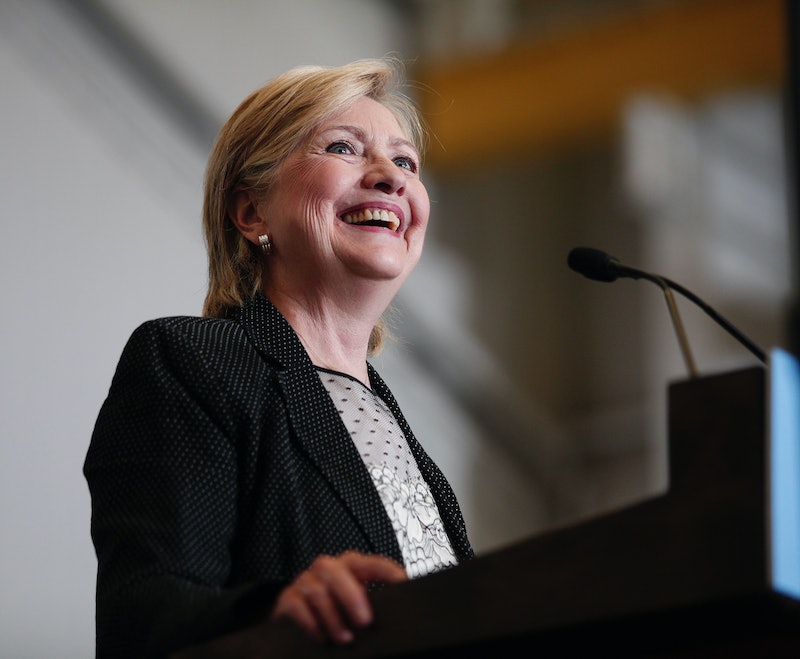 In some corners of the Internet, Hillary Clinton is president. There are a collection of blogs and Twitter accounts that imagine Nov. 8, 2016 as going a different way. Many offer lighthearted satire, but some of these accounts also come from a sincere place of frustration about the discrepancy between Trump's actions and behavior as president and the things Clinton had promised to do. Whether a form of catharsis, critique, or advocacy, or some combination of all three, things like the HillaryBeatTrump.org are all about highlighting the imagined contrast between a would-be-Clinton White House and the current reality of the Trump one.

Take Trump's mid-month press conference, for example, in which he attempted to refute reports of his campaign communicating with Russia, among other things, to startlingly negative reviews. The New Yorker called it "surreal;" Rolling Stone called it "unhinged." It didn't seem like the sort of conference a President Hillary Clinton would have held — and according to these bloggers, it wasn't.

"DAY 27:" reads a post on @IfHillaryHad, one of the most popular alternative reality accounts, "I don't blame my shortcomings on 'fake news.'" HillaryBeatTrump.org, which mimics a real news website in format and content, ran an article about how Clinton would behave in Trump's shoes: "NYT Pans Clinton's 'Oppressively Intelligent Press Conference' As 'Boring and Too Sane.'" The article also "criticizes" Clinton for her command of policy, understanding of the Constitution, and sanity.

For some of these bloggers, Clinton's loss is still a fresh wound. "It was absolutely soul-crushing to see the dream [of a female president] die that night," says Sarah Lerner, who runs the popular @IfHillaryHad Twitter account. Lerner created the account, she tells Bustle, because she "needed a reminder of what a typical statesman/stateswoman was supposed to act like."

Lerner's President Clinton, for example, knows who Frederick Douglas is, meets with queer activists, and grabs drinks with Angela Merkel. On Day 11 of her Twitter presidency, she reminded followers that she was "still pro-choice as f*ck" and sent Bill to Safeway for some Doritos. She serves as fake president with fake vice president Tim Kaine loyally by her side, also armed with a Twitter account (and plenty of dad jokes, of course).

Not all alt-POTUS accounts seem to be as wholly positive about Clinton and what her potential presidency would have looked like. in fact, they can be downright morose. Over on @IfHillaryHadWon, Clinton dies on her second day in office, an apparent throwback to the old conspiracy theory, popular amongst alt-right conservatives, that Clinton was hiding a terminal illness.

With articles like "Trump Says JonBenét Ramsey Had the Makings of a 10" and "Trump Vehemently Denies Mental Illness, Explaining: 'I'm On Tons of Cocaine,'" HillaryBeatTrump.org is arguably the edgiest alternate-reality account of them all, and injured Trump supporters are taking notice.

"I have gotten hundreds of furious, fulminating emails from Trump crazies demanding I 'grow up' and 'stop pretending,'" the creator of HillaryBeatTrump.org, who asked to remain anonymous, tells Bustle. "They've trolled themselves."

Some conservatives may protest and brandish these blogs and Twitter accounts as merely a bunch of sore losers, but they can't stop them from mocking and criticizing the current administration. As the editor of HillaryBeatTrump.org tells Bustle, "Milo wishes he had our wit."