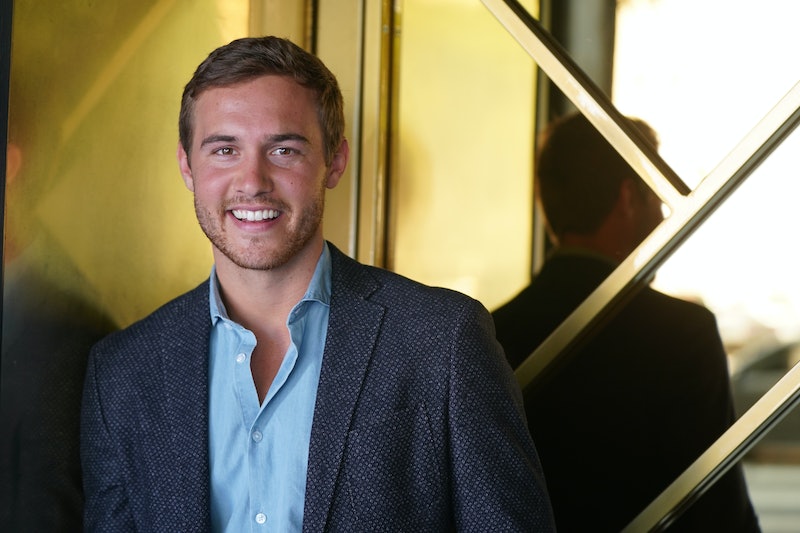 Peter Weber's season of The Bachelor already has all of the makings of becoming the most dramatic season in the show's history, however, if you're hoping to know how it all ends, you may be in for a rude awakening. When speaking with The Hollywood Reporter, the Bachelor claimed his finale will be "spoiler-free," and while that may seem like an impossible feat in today's social media-crazed world, it's prompted several theories on how Peter's Bachelor season will end that'll help explain why he feels so confident that leaks will be few and far between.

“I’m very confident that no one is going to be able to spoil it,” he told the outlet. “There’s a reason I believe that, and obviously can’t say it otherwise it gives it away. I’m very confident that Reality Steve and all of these people, they’re not going to find out what happens.” Throughout the years, Reality Steve has served as a sort of Bachelor spoiler extraordinaire, posting numerous details of what happens during any given season — many of which turn out to be true. And yet, Peter has little doubt that his Bachelor season will remain a secret up until the very end, which will add a new suspenseful element to the show that it's lacked for many years.

“There’s no way they’re going to find out,” he added. “I’m very excited about that because I think that’s what this show has wanted for a while and I’m excited that for my season there’s a really good chance that happens.” Naturally, Peter didn't elaborate on how such an accomplishment would be possible, but his sheer confidence in the matter may have given away more than he realized...

Peter's Season Isn't Actually Over Yet

What if Peter's season hasn't finished filming? After all, it'd be difficult to spoil something that hasn't even happened yet. Perhaps that's where Peter's confidence comes from.

Then again, maybe Peter opts to leave the show altogether and run off into the sunset with Hannah. At this point, anything is possible.

Peter Chooses None Of His Contestants

Hannah B. has already appeared twice on the series and it's clear that Peter's feelings for her are still very real. Maybe he ends up realizing that none of his other relationships compare to how he feels about her and opts to choose none of his contestants in order to try and win Hannah back. She definitely didn't join his season due to her scheduling on Dancing With the Stars, but that doesn't mean they couldn't have gotten together afterward.

Ashley P. Wins It All

A cow winning The Bachelor? Now that's an ending no one would ever see coming.

Regardless of how this plays out, odds are this will be a season of The Bachelor no one will soon forget.