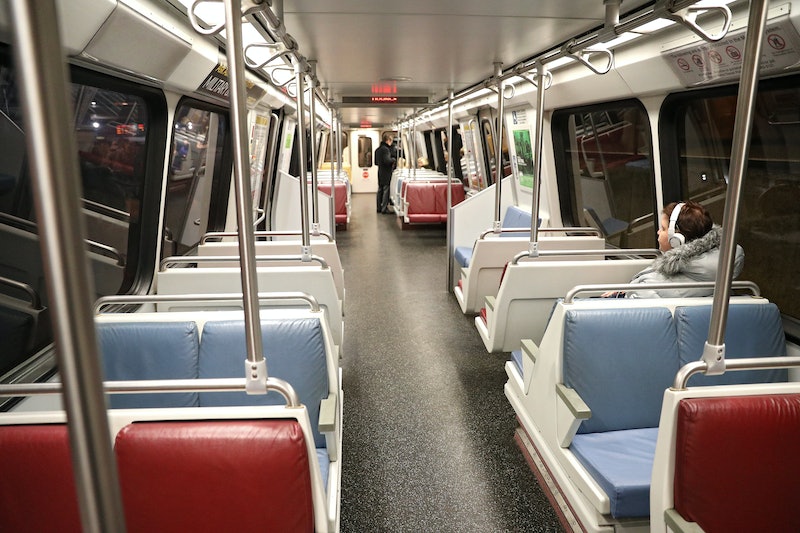 Over five hundred thousand marchers are expected to arrive in Washington, D.C. on Saturday, Jan. 21, for the Women's March on Washington. Planned in the immediate aftermath of Donald Trump's election to the president of the United States, the march directly challenges Trump and his administration's anti-women stances, just a day after his inauguration. Although Trump may have won the most Electoral College votes, these photos of the women's march in D.C. versus photos from Friday's inauguration reveal that Trump is definitely not the People's President for American women.

The streets of D.C. seemed fairly empty on Friday before, during and after Trump's inauguration. The 45th president of the United States failed to receive the same crowds that former President Barack Obama did in both 2009 and 2013.

But you don't need the D.C. Metro stats to know the Trump inauguration didn't quite attract the stunning crowds Trump and his people were expecting. In fact, what's more stunning were the photos revealing how empty and lifeless the subway cars and streets were on Friday.

Meanwhile, thousands and thousands of people attending the March on Washington piled into already packed trains and metro stations Saturday morning. March organizers were expecting the crowds to be larger than the ones at the Inauguration Day parade.

These following photos of Trump's inauguration, when juxtaposed with the 2017 March on Washington, say it all: Nasty women fight back.

Trump's Inauguration From The Air

Meanwhile, the D.C. Metro at the Women's March on Washington

The Women's March From The Air

The 2017 March on Washington featured a number of speeches from famed feminist activists, including the writer Gloria Steinem. Actresses such as Ashley Judd, Scarlett Johansson and America Ferrera were also scheduled to speak on Saturday, and singers such as Janelle Monae were set to perform.

Steinem commented on Trump's inauguration speech Saturday. "Everything that happened before him was a disaster and everything that he would do would be fantastic, the best ever, miracles and all the superlatives," Steinem said.

In the spirit of the women's march, which seems to truly represent the people of America, Steinem added: "He said he was for the people... I have met the people and you are not them."