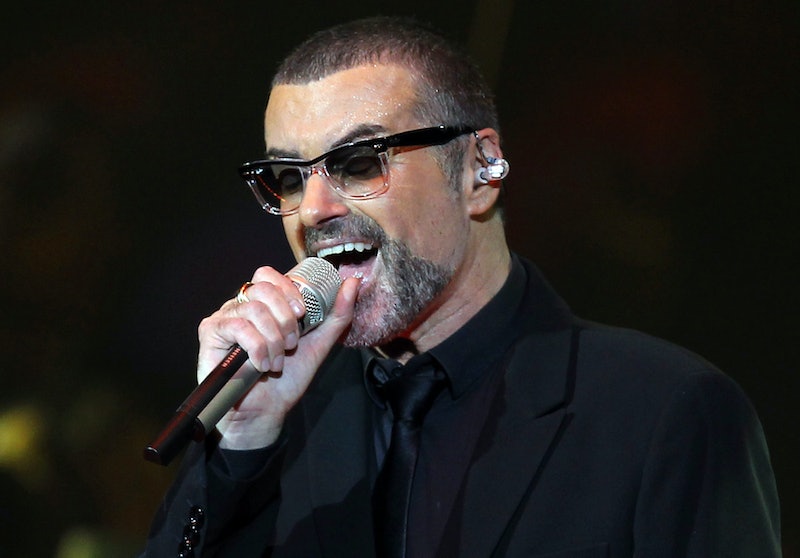 The world lost an artist this Christmas. Performer George Michael died at his home in Oxfordshire, England on Sunday, reportedly due to heart failure, at the age of 53. Michael was a truly special performer — from his early years with Wham! to his iconic solo work of the Faith era to his sensational tours of the early 2000's. While his personal struggles with addiction and his tangles with the law often threatened to overshadow his art, in photos of George Michael, the camera made clear that the performer was undeniably a star.

His music was electric and his presence indisputably sexy. In the music video for "Faith," he swivels his hips like a latter day Elvis. In the music video for "Freedom," which, sidenote, may be the greatest music video of all time, Michael's chiseled features are no less gorgeous than those of his costars, Linda Evangelista, Christy Turlington, Naomi Campbell, and Cindy Crawford. Whether he was wearing bleached hair and knit sweaters on a Wham! album cover or a leather jacket and cross earring in a '90s performance, George Michael looked gooooood. And he made us feel good, too. On that note, feast your eyes on some parting shots of this pop icon looking fierce, fun, and seriously fine.

More like this
Theo James Would “Love” To Star In George Michael Biopic
By Sam Ramsden
Adam Lambert Called Out The George Michael Biopic Over Potential Casting
By Sam Ramsden
Beyoncé Wore A Golden Sheer Gown At Her VIP Dubai Concert
By Sam Ramsden
Twitter Is In Awe Of Taylor Swift’s “Lavender Haze” Music Video
By Jake Viswanath
Get Even More From Bustle — Sign Up For The Newsletter
From hair trends to relationship advice, our daily newsletter has everything you need to sound like a person who’s on TikTok, even if you aren’t.