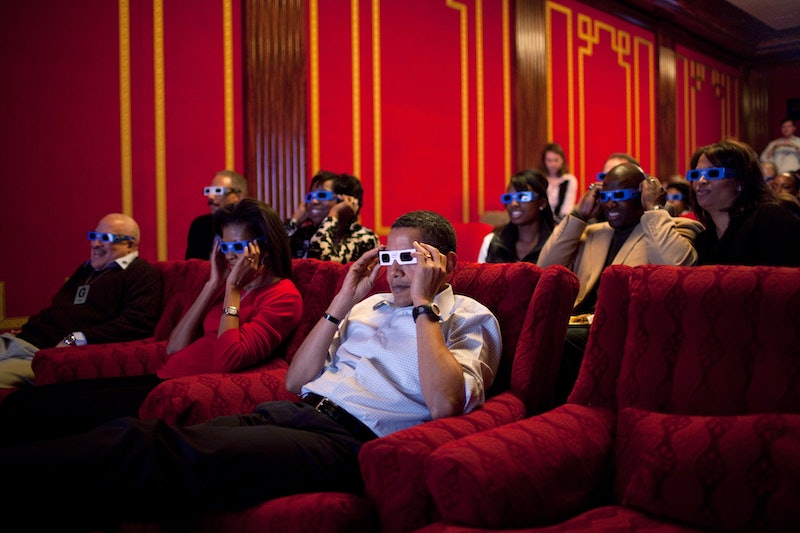 We can finally replace the comparison between President Donald Trump and Barack Obama's Inauguration crowds. This week's side-by-side photos will surely be of each president's first Super Bowl party as commander-in-chief. Just look at how they each celebrated. Obama's first Super Bowl vs. Trump's is pretty telling.

Back in 2009, Obama was at the White House in the theater hosting a bipartisan watch party and rooting for the Pittsburgh Steelers against the Arizona Cardinals. The president, First Lady Michelle Obama, and the whole party donned 3D glasses at one point (it's not exactly clear why) in an attempt to enjoy an American pastime with Republicans.

Fast forward eight years, and Trump is at his Mar-a-Lago country club with his wife, Barron, and his chief-of-staff's family. They're seated at a round table as if it were a wedding reception; some seem to have their back to the screen. Despite some tacky NFL paraphernalia scattered on the table, you can't help but think it's a little staid. There's even a velvet rope between the president and the other party-goers.

If that weren't proof enough of his lame party status, Trump also left early. Maybe because his team was losing — if you didn't know, Trump hates to lose. When he left the Atlanta Falcons were ahead by 28 to 3. Before the game he predicted the New England Patriots would win and told Bill O'Reilly that he likes the Patriots owner, Robert Kraft, and coach Bill Belichick. "Tom Brady is my friend," he added in the pre-Super Bowl interview.

Hopefully, he did get to see most of the Patriots' remarkable comeback. You wouldn't wish missing that on anyone. He at least knew enough to tweet about it. "What an amazing comeback and win by the Patriots. Tom Brady, Bob Kraft and Coach B are total winners. Wow!" Trump sent out Sunday night.

Before we give the best party award to Obama by default, it's important to note that it had another aim besides a good time. It was about "bringing people together," the White House press secretary Robert Gibbs told CNN at the time:

He'll have more members of Congress over here Sunday to watch the Super Bowl and, again, reach out to and get to know in a better way members on both sides of the aisle to see where we can work in concert to improve the lives of the American people.

This would seem to play in Trump's favor — because you all know how long that bipartisanship lasted. Obama reached across the aisle thinking he had a firm grasp on the ball, but the Republicans tackled him. So maybe we have to call these parties a tie after all.

The one takeaway then? It helps to have the president rooting for you. Both their teams won.