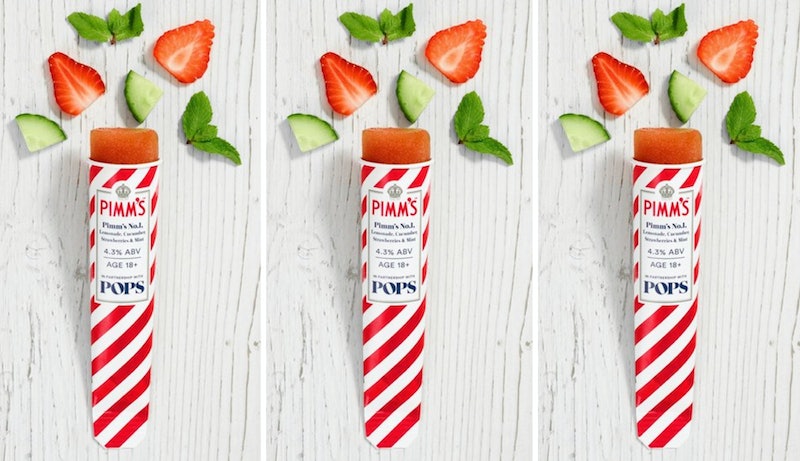 After what feels like, quite frankly, the longest winter ever, you'll be pleased to know that summer is finally here. June 21 marked summer solstice, that means it's time for festivals, light evenings, day drinking, and good weather (hopefully). While the signal of summer for some is the smell of suncream or the taste of a freshly BBQ-ed burger, for others its the crisp taste of Pimm's, of course. Pimm's has been a staple of British summer for generations but now they have taken in to the next level with Pimm's Ice Lollies, so we can have the sweet taste of summer while cooling down in the (hopefully) sun.

Pimm's is the perfect day drinking beverage, with its combination of refreshing taste and an injection of fruit. Compared to all the other bevs on the market such as beer, wine, or even canned cocktails, I believe Pimm's is undoubtedly superior and nothing says summer like this drink.

Although it is pretty easy to make Pimm's ice lollie's at home from scratch, it can take a little while, and that time could be better spent outside sunbathing (hopefully). So, enter Pimm's very own ice lollie's that you can buy at the shop and pop in your freezer, reayd whenever you are. You don't have to worry about chopping fruit and mixing ingredients; think minimal effort but maximum high quality Pimm's taste.

According to Cosmopolitan, the Pimm's ice lollies are from the same company that make the Prosecco, Moscow Mule, and Martini ice pops that you can get from Aldi, which are pretty spectacular so I'm expecting big things from this. You'll be pleased to know that there aren't any other nasty bits added to these ice lollies, just Pimm's, cucumber, strawberries, mint, and of course lemonade. Pretty pure and simple, right? As the product description reads on Ocado:

"Our goodies for grown-ups are made in Britain with natural, premium ingredients and dash of real alcohol.The world's first PIMM'S popsicle is made in Britain using PIMM'S No.1, lemonade, real strawberries and wonky cucumbers."

Sounds delicious to me. I mean, what could be better that a chilled alcoholic beverage? Each of these ice lollies is essentially a glass of Pimm's condensed into ice lollie form, so you don't have to worry about your Pimm's beind seriously watered down. As Tesco Ice Cream Buyer Sonia Morland (OMG, how do I get this job?!) told the supermarket, "these refreshing ice lollies are a guilt-free treat and represent a glass of Pimm’s in frozen form." According to Tesco, each lollie has an ABV alcoholic rating of 4.3 percent, which is pretty good.

The price of these lollies is a little on the spenny side, coming in at £3.99 on Ocado for three lollies. But, TBH, they're definitely worth it in my opinion. You'll be the talk of any party if you show up with a few boxes of these under your arm.

So you can grab them now, and that's your summer day drinking sorted.