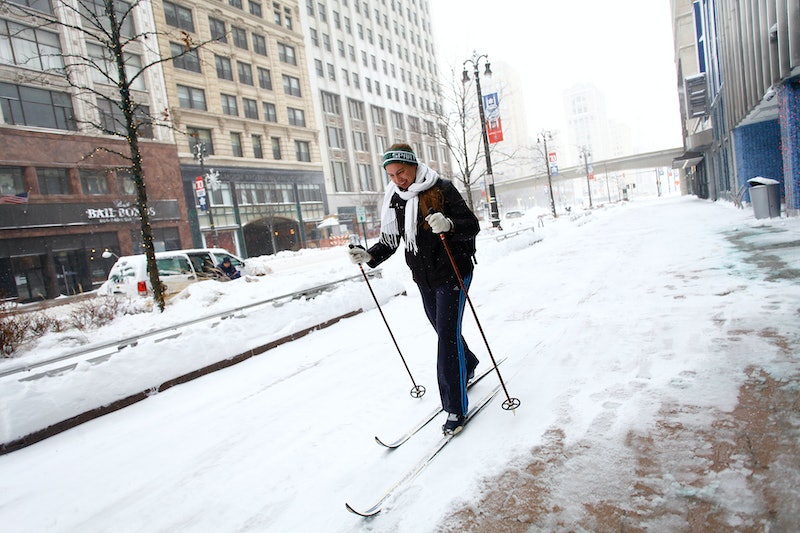 This week, millions of people across the country are expected to face the coldest temperatures in more than two decades, according to The Weather Channel. A few polar vortex 2019 maps from the network show just how cold some areas of the midwest will be, starting on Wednesday. Though it's hard to even imagine, cities like Chicago might experience extreme arctic environments, with temperatures as a low as minus 46 degrees Fahrenheit.

According to The Weather Channel, daytime highs in several midwest cities across the country are not expected to rise above subzero temperatures. But it's not just midwestern cities that are going to take a freezing cold hit this week: The Weather Channel further reports that by Thursday, cities along the northeast corridor from Washington D.C. to Boston are expected to have daytime lows in the single digits, and might be even colder.

It's tough to even fathom just how cold a temperature like minus 40 or 50 degrees might feel on your skin. As meteorologist Marc Weinberg notes below, it only takes five minutes of exposure to get frostbite in temperatures as cold as minus 40 degrees Fahrenheit. So if you live in Chicago, you might want to work from home on Wednesday.

According to The New York Times, if the temperatures predicted for Chicago turn out to be as low as expected, it will mark the coldest day for the city since officials started keeping records.

To the publication, Chicago-based meteorologist Tom Skilling said that the weather this week is going to be a "doozy," and that it'll likely be so cold in Chicago that “we’re going to hear buildings and outdoor objects creaking.”

Something worth noting is how cold it will still likely be, even if temperatures don't reach the predicted numbers. For example, if Chicago experiences subzero temperatures closer to minus 15 or 30 degrees, rather than minus 45 degrees, it will still be so cold that if you throw water into the air, it'll freeze before it hits the ground.

By minus 40 degrees, Jezebel notes, it will become actively difficult to breathe in the frigid air without coughing. So it's important that anyone living in the affected areas keeps an eye on the temperature as the hours pass, given how the danger becomes exponential with each drop on the thermometer.

Per The New York Times, a polar vortex is a mass of cold air within bands of circulating winds which descends southward from its standard location near the North pole. The prevalence of polar vortexes has increased in recent years; scientists haven't quite determined why this is happening, the publication notes, but believe there is a link to climate change.

Another factor to consider will be wind chill, which might drive some temperatures down to minus 60 degrees, according to Rich Otto, a meteorologist with the National Weather Service. To NPR, Otto said,

The winds in combination with the cold temperatures are going to allow for some dangerously cold wind chills, values as cold as minus 30 to minus 50 degrees in a couple locations, and even colder as you get farther north, into parts of Minnesota, where some of those wind chills could get down to minus 60.

In other words, keep your weather app or channel open over the next few days, bundle up, and try to avoid going outside as much as possible,if you live in an area that's expected to be slammed by this frigid week.

More like this
7 Ways To Help People Impacted By Hurricane Fiona In Puerto Rico
By Carolyn Steber
7 Symbolic Meanings Of Autumn — From Letting Go To Self Preservation
By Kirsten Nunez
The Historical Meaning Behind Why Autumn Is Called ‘Fall’
By Chelsey Grasso
If You Have Any Of These Expensive Problems Around Your Home, You'll Love These Genius, Cheap Fixes
By Mackenzie Edwards
Get Even More From Bustle — Sign Up For The Newsletter