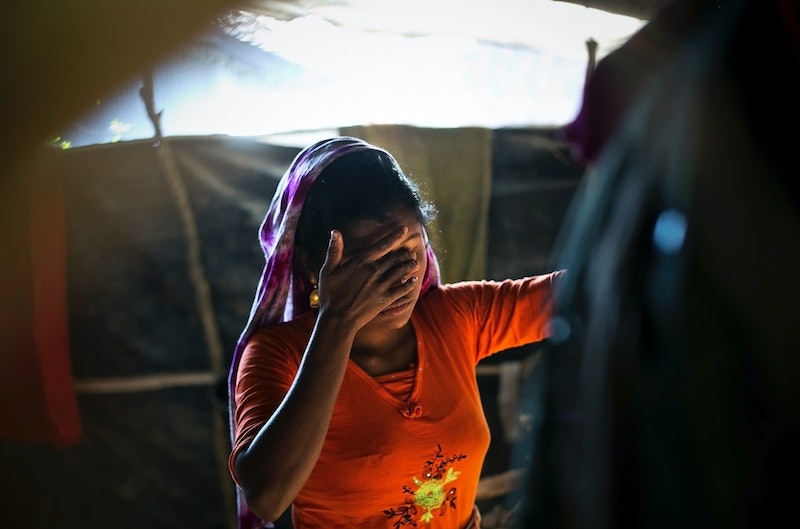 Donald Trump recently signed an executive order temporarily preventing people from seven Muslim-majority countries from entering the United States — even with valid visas or refugee status — and indefinitely barring Syrian refugees. This order has already resulted in detentions and deportations in airports across the country, but why was it signed in the first place? Trump argued throughout his campaign that refugees were responsible for crimes both at home and abroad, but this argument is contradicted by actual refugee crime rates.

Trump's travel ban includes seven countries: Iran, Iraq, Libya, Somalia, Sudan, Syria, and Yemen. Here's an important fact: Exactly zero refugees from any of these countries have killed anyone in terrorist attacks in the U.S. In fact, the CATO Institute reports that no one from any of these countries — not just refugees, but no one at all — has killed anyone in a terrorist attack on U.S. soil in the past 40 years.

Last summer, Republican Sen. Jeff Sessions — who Trump nominated to be the U.S. Attorney General — published a list of "individuals convicted in terror cases since 9/11." Of the 580 cases mentioned, Sessions argued that at least 380 were foreign born. The CATO Institute pointed out, however, that not all of the convictions on the list pertained to terrorism, and not all of the terror-related convictions pertained to incidents on U.S. soil.

So, given the pervasiveness of "alternative facts," it's important that we take a look at the statistics and see if there is any truth to Trump's claims that he is making America safer.

According to the Pew Research Center, the number of refugees who were resettled in the U.S. in the 2016 fiscal year was almost exactly the same as the ceiling of 85,000 that the Obama administration had set. More refugees came from the Democratic Republic of the Congo, Syria, and Burma than any other country, but only Syrian refugees have been indefinitely barred by Trump's executive order.

The CATO Institute made an important point about refugees entering the U.S. and terrorism: "Of the 3,252,493 refugees admitted from 1975 to the end of 2015, 20 were terrorists, which amounted to 0.00062 percent of the total. In other words, one terrorist entered as a refugee for every 162,625 refugees who were not terrorists."

Moreover, only three of the 20 were successful in their attempts to carry out terrorist attacks. These three refugees were from Cuba — which isn't on Trump's list — and killed three people in the 1970s before the Refugee Act of 1980 created the intensive vetting procedure that is in place today.

Of the supposedly terrorism-related convictions on Sessions' list, 241 cases did not actually pertain to terrorism. Three of the people on that list — Hussein Abuali, Nasser Abuali, and Rabi Ahmed — were classified by the Department of Justice as having committed a terrorism-related crime. However, while the FBI had initially suspected them of purchasing a rocket-propelled grenade, they were actually charged for was receiving two truckloads of stolen cereal.

During his campaign, Trump criticized German Chancellor Angela Merkel for welcoming so many refugees into Germany. He argued that the massive influx of refugees was a "disaster" for the people of Germany, and that "crime has risen to levels that no one thought they would ever, ever see."

Trump was not the only one who made this assertion. Following the New Year's Eve 2015 assaults on a number of women in Cologne, Germany, many people — including public officials — were quick to link refugees to the attacks. But as data from the German Interior Ministry clarified, the number of crimes that took place in Germany did not see a dramatic increase with the admission of more refugees.

The Trump administration and the people Trump wants to hire for top jobs evidently don't care about spreading misinformation — see Kellyanne Conway and her "alternative facts" for more — but it is more clear than ever that there is no statistical basis for Trump's policies.

There is no evidence whatsoever that barring refugees from any of these countries would reduce crime rates and incidents of terrorism. The refugee ban is, therefore, more about Islamophobia and preserving structures of power than it is about keeping the United States safe.