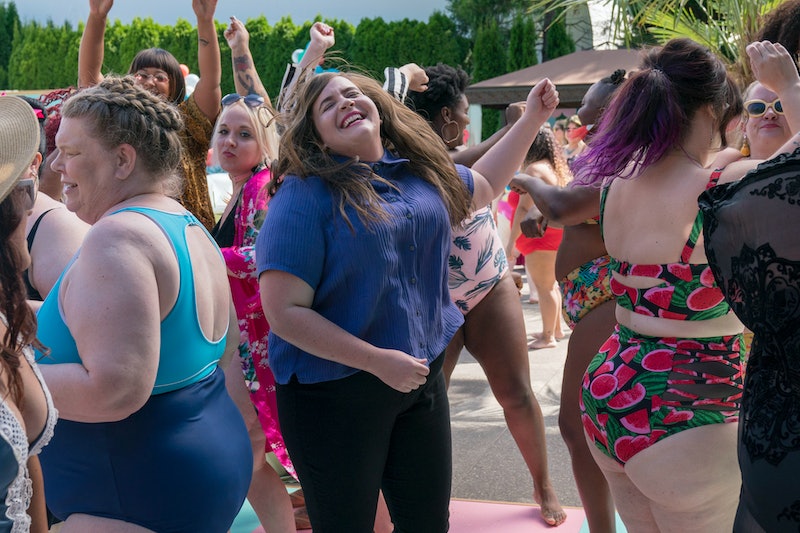 Shrill only premiered on Friday, March 15, but the Hulu original is already resonating with plenty of viewers. Based on Lindy West's memoir of the same name, the show focuses on Annie, a plus-size, 20-something woman who's just trying to build a career as a journalist and have a functioning love life at the same time. It's a rare show that prioritizes a plus-size woman's point of view — Annie's not just the funny best friend, she's the protagonist — and these tweets about Shrill show how important body representation is, and how starved audiences have been to see themselves onscreen.

The Hulu series, which stars Aidy Bryant as Annie, just gets the experience of being a person in a larger body. Shrill's first season only includes six episodes, but they really pack a punch. Many people were quick to point out some of the most relatable moments in the series. And based on fans' tweets, it's clear that there's a huge audience for more body-positive content on screen.

Unlike other shows with plus-size protagonists, Shrill doesn't make losing weight the main focus of Annie's story. And that, in itself, is in direct contrast to other shows that have featured plus-size main characters. In the first episode of This Is Us, for example, Kate fell off a scale and wrote notes to herself about not eating her own birthday cake. And in the beginning of Dietland, Plum considered getting weight-loss surgery, against the advice of her mom and her best friend.

But she also side-eyes a fitness instructor who tries to lecture her about weight loss. And she shows the ridiculousness of diet restriction when joking about how filling it is to eat six almonds between (already tiny) meals, per a diet her mother wants them to do together.

The first episode of Shrill, by contrast, skips the stereotypes about fat people wanting to change their bodies, and shows what it's like just to live in those same bodies. In one especially relatable scene, Annie tries to stretch her shirt over her knees to make it wider, a moment that resonated with many viewers straight away. It inspired its own series of tweets from people who could relate to the experience.

And that wasn't the only sequence that connected with viewers. The pool party in Shrill's fourth episode, "Pool," also made waves on Twitter, with a number of viewers tweeting that the dance scene brought them to tears.

Seeing people in larger bodies just dancing and enjoying themselves is revolutionary. No one is apologizing for how they look in a swimsuit; they're just out there, existing and having fun. The scene celebrates the characters' bodies simply for existing, even in non-straight sizes, and fans noticed.

In Shrill, being in a larger body is part of Annie's life, but it doesn't define her. She isn't confident all of the time — but who is, regardless of their size? Shrill is authentic because it captures all of the different ways someone might relate to their body, depending on their mood. The show is relatable and nonjudgmental, and that's pretty refreshing in its own right.