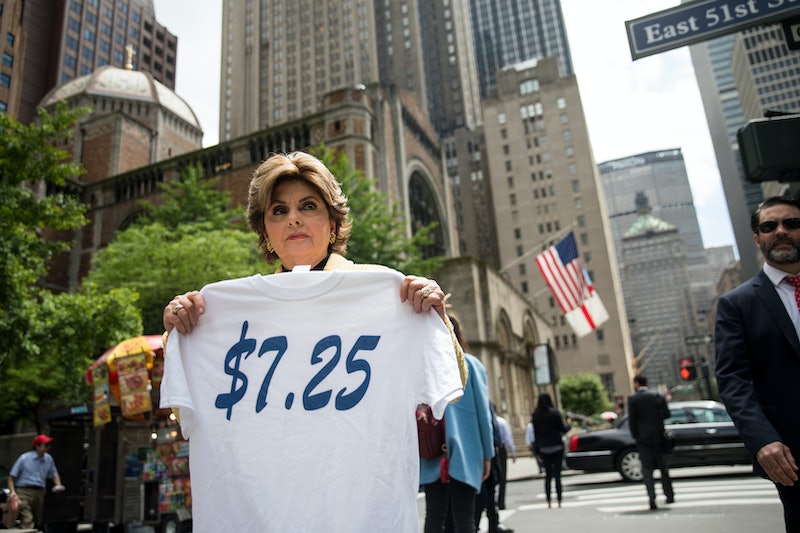 The federal minimum wage has sat firmly at $7.25 an hour since 2009, but dozens of states have taken action to improve that number for their workers. Along with the District of Columbia, 29 states' minimum wages are higher than the federal one, according to ABC News, and many intend to keep raising that bar in the new year.

Twenty of the 29 states that sit above the standard federal minimum wage have voted to increase their rates starting next month, but again in some cases it's more than others. Alaska is raising its minimum wage a mere five cents from $9.84 to $9.89. New Jersey is going from $8.60 to $8.85. But notably, in some states with the highest minimum wages already, rates are going up as much as a full dollar. Massachusetts is going from $11 to $12, Colorado from $10.20 to $11.10, and Maine from $10 to $11.

According to NBC News, eight of those 20 states — Arizona, California, Colorado, Maine, Massachusetts, Missouri, New York, and Washington — are phasing in minimum wage hikes that will eventually get them to between $12 and $15 per hour.

"Fifteen dollars an hour has become the new minimum wage, meaning that that’s to afford the basics," Paul Sonn, state program policy director at the National Employment Law Project, told NBC. "It’s just a start. Those with children and in expensive states need even more."

According to a 2017 report from the Pew Research Center, the dollar has lost about 9.6 percent of its purchasing power since 2009, due to inflation. In 2012, the "Fight for $15" movement began advocating for higher minimum wages for fast wood workers, childcare providers, airline employees, and more.

"It may not have motivated every lawmaker to agree that we should go to $15," David Cooper, a senior economic analyst at the Economic Policy Institute, told the Associated Press. "But it's motivated many of them to accept that we need higher minimum wages than we currently have in much of the country."

The Economic Policy Institute estimates that the state increases alone could affect some 5.3 million workers nationwide, about 8 percent of the workforce. That doesn't include people working in cities and counties that are further raising wages with local policy changes.

Opponents of minimum wage hikes have argued that they'll lead to lower hiring rates, but that logic is changing too, according to University of Massachusetts economist Arin Dube. "I think the weight of the evidence to date suggests the employment effects from minimum-wage increases in the U.S. have been pretty small, much smaller than the wage increases," Dube said on NPR's "Planet Money," in November. "For example, 30 years ago, most economists expressed confidence in surveys that minimum wages had a clear negative impact on jobs. That is no longer true today."