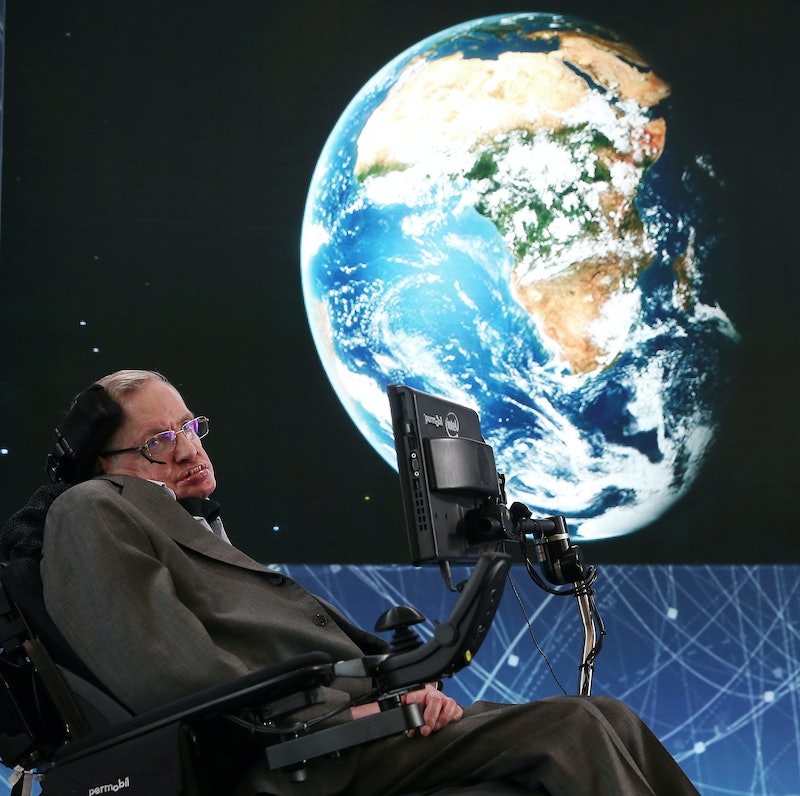 World-renowned physicist Stephen Hawking died on Wednesday at the age of 76. Hawking was a pioneer in multiple ways, inventing innovative theories about black holes and becoming one of the planet's most respected scientists while living with amyotrophic lateral sclerosis (ALS). To remember him, celebrities, fans, and organizations all over the world are sharing memes and tributes to honor Stephen Hawking in the wake of his death.

Hawking will be remembered most for his ingenious cosmological theories, many of which were about black holes. He hypothesized that black holes radiate thermal energy and eject particles as opposed to simply destroying everything they come into contact with. According to Hawking, if a particle-antiparticle pair encounters a black hole, one half will be sucked in while the other will scatter into space, taking some energy from the black hole along with it.

On Wednesday, Hawking's family remembered him as "a great scientist and an extraordinary man whose work and legacy will live on for many years." In a statement, they wrote:

His courage and persistence with his brilliance and humor inspired people across the world. He once said, "It would not be much of a universe if it wasn't home to the people you love." We will miss him forever.

Here are some of the best tributes on social media for Stephen Hawking.

Hawking's fame and impact is often compared to that of Albert Einstein. The lifetimes of the two scientists overlapped for 13 years, from Hawking's birth in 1942 to the latter's death in 1955. Above, he comments on Einstein's theory of relativity, which helped him craft a famous 1970 paper that postulated that the universe began with a "singularity" in which matter was extremely compressed.

In 2007, NASA took Hawking for a ride on a zero-gravity flight on a Boeing 727 aircraft. Hawking later said of the experience, "For me, this was true freedom."

"Look Up At The Stars"

This is one of Hawking's most frequently quoted statements. He said this to ABC's Diane Sawyer back in 2010, after being asked for advice that he'd give to his three children.

It's true: Hawking's birthday lines up with Galileo's day of death, and his own death aligns with Einstein's birthday. Too bad he's no longer alive to explain that miraculous set of facts.

Hawking appeared on television many times in his life — including, fittingly, the sitcom The Big Bang Theory; he briefly played himself as a mentor to Sheldon Cooper, a physicist and one of the show's main characters. In a memorable line from Hawking's brief tenure on the show, Cooper's assistant said of his boss: "He's asked me to hold all calls unless you're Stephen Hawking, his mother, or himself from the future."

In addition to The Big Bang Theory, Hawking showed up as a hologram in Star Trek: The Next Generation and made short appearances on Futurama and The Simpsons.

From One Astrophysicist To Another

Like Hawking, Neil deGrasse Tyson is one of few modern scientists who has become a household name. Hawking awarded Tyson the Stephen Hawking Medal for Science Communication last year.

Hawking was diagnosed with ALS at age 21. The disease slowly paralyzed him and eventually rendered him unable to talk. Instead, he communicated with a device that read his facial expressions and turned them into words and phrases.

After receiving his ALS diagnosis, Hawking was told that he didn't have long to live. — he went on to live more than 50 additional years.

Hawking said this to Der Spiegel, a German newspaper, in 1988.

Hawking said this in an interview with The New York Times in 2004.

"My expectations were reduced to zero when I was 21," he explained during the same conversation. "Everything since then has been a bonus."

On Living With A Disability

In addition to his astrophysics work, Hawking also advocated for disability rights. He has spoken in favor of giving higher education institutions more resources to support students with disabilities.

Hawking defied the world's expectations in managing to live for 50 years with ALS. His groundbreaking astrophysics theories changed the field forever. The scientist will be sorely missed.