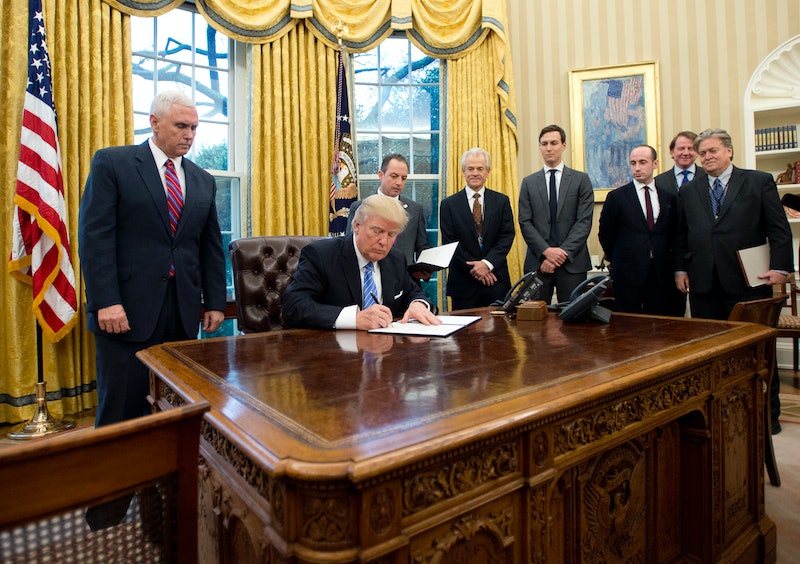 The global trolling of Donald Trump's administration continued Friday from all the way in Scandinavia. Swedish lawmakers trolled Trump by mocking the now infamous image of his male-dominated Oval Office with a gender swapped image. The picture paints Sweden as a glorious feminist wonderland, and while that might not quite be the case, it should still remind Americans of why fighting in the Trump resistance is important.

The picture seems to be in reference to Trump signing the "global gag rule" executive order last week, when he enacted the anti-feminist law in a room surrounded by men. In the Swedish picture, Isabella Lövin, the Swedish Deputy Prime Minister and spokesperson for the nation's Green Party, is surrounded by female legislators, press secretaries, and advisers as she signs the bill.

Lövin spoke with Swedish news outlet The Local about the photo, and insisted that there was no intentional trolling. "We are a feminist government, which shows in this photo. Ultimately it is up to the observer to interpret the photo."

The conclusion most people are choosing to draw is that the photo was a well deserved middle finger straight to Washington, D.C. The visuals are a stark contrast to Trump, as well as the bill that Lövin actually signed — it's an unprecedented climate change measure that would force the country's future government officials to stick to a net zero emissions goal by 2045.

According to the United Nations Development Program, Sweden ranks number six in the world for gender equality. Women are nearly equally represented in Parliament, and hold about 40 percent of local government positions too. However, some critics are quick to remind people that the ranking doesn't say so much about Sweden as it does about the rest of the world. Cecilia Schelin Seidegård, who spearheaded the Swedish government's special investigation of gender equality, wrote an op-ed for The Local challenging the country's reputation as a haven of gender equality.

"Even though Sweden has a good position in many international rankings, it does not mean that the country is equal," Seidegård wrote her op-ed. "Rather, it could be understood in relation to insufficient progress in many other countries."

Americans can certainly see that lack of progress reflected in their current government, as Trump's original photo so painfully showed. Congress is just 19 percent female, despite the fact that the country is more than half women now. Only two women were appointed to Trump's Cabinet, and Betsy Devos' confirmation troubles might bring that number down to one. Plus, there's the whole war on women that Trump is waging. On the whole, getting anywhere close to Sweden's feminism right now would be just short of miraculous.

Sweden may not be perfectly gender equal, but it sure seems a lot more welcoming for women than the United States right now. The thought of jumping ship and trying to immigrate is tempting, but if you have the means to do that, you also have the responsibility to fight and put the country back on track. Women around the world have your back, and this is a fight for them too. No one is equal until everyone is, so keep working hard for equality here.