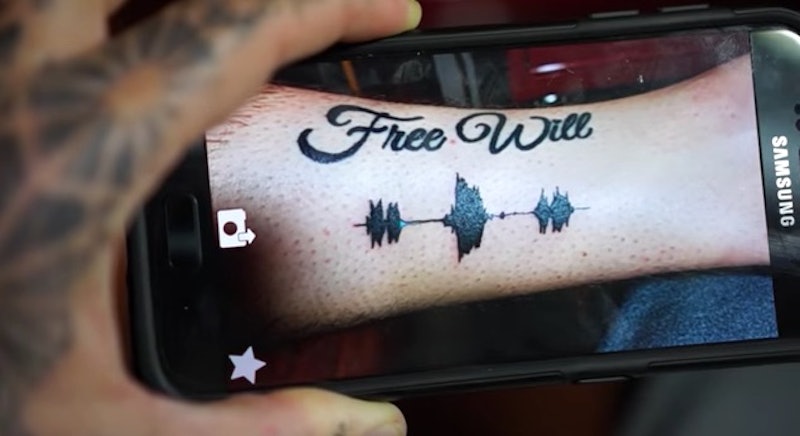 This idea, like so many of the best ideas, started with Elton John.

When Nate Siggard inked the opening line of “Tiny Dancer” on two friends in his California tattoo parlor, his girlfriend, Juliana, had a thought. “Wouldn’t it be cool if you could listen to the tattoo?” she asked. Inspired, Siggard combined art and technology to create Skin Motion, an app that allows you to immortalize sound on your skin with tattoos you can hear.

“Have you lose a loved one that you would like to memorialize forever in a way that you can tell their story and share it with the world?” the Skin Motion website writes, “Perhaps you have a favorite song or quote that represents who you are and why you are here. Maybe, you are the life of the party and you love a great joke — one that breaks the ice and invites others to take a step back from the seriousness of life and have a good laugh. Soundwave Tattoos are a brand new way to express yourself using art and technology. What is more personal, more permanent, and more meaningful than a tattoo? A tattoo you can play back.”

(I don’t know if I would use “life of the party” to describe someone who whips out their tattoo to play a pre-recorded joke, but hey, to each their own.)

Here’s how the technology, which Siggard wrote the patent for, works: You choose an audio clip of up to a minute long that you upload to the Skin Motion App, purchase the resulting “augmented reality” tattoo, and then get it tattooed by a Skin Motion-certified artist. Once it’s inked on you, you’ll be able to use the Skin Motion app to listen to the audio squiggles — whether it be a clip of a song, or the voice of a loved one — whenever you want.

When Siggard uploaded a video of his own sound wave tattoo, a recording of Juliana saying “I love you,” and the sound of their four-month-old laughing, the post went viral, but many people suspected it was fake. In order to dispel rumors that it was a hoax, Siggard uploaded a number of videos to the Skin Motion website that show the tattoos at work, including one of Juliana’s Soundwave Tattoo, which is a recording of her dog Baci howling (Baci, for his part, seems a little uneasy about the whole thing).

The one-of-a-kind app doesn’t launch until June, but there’s already a waiting list of people eager to get their favorite sounds etched on their bodies. Skin Motion says many of the thousands of enquiries it has received have been from people wanting to preserve the voice of a loved one who’s passed away. It has also received hundreds of applications from artists who want to get certified in Soundwave Tattoos.

Skin Motion emphasizes the importance of seeing a certified artist to make sure that your tattoo not only works with the app, but ages well over time. The team is also working to accommodate existing wave tattoo forms, so the app can be used by those who got tattoos of sound waves before this technology existed.