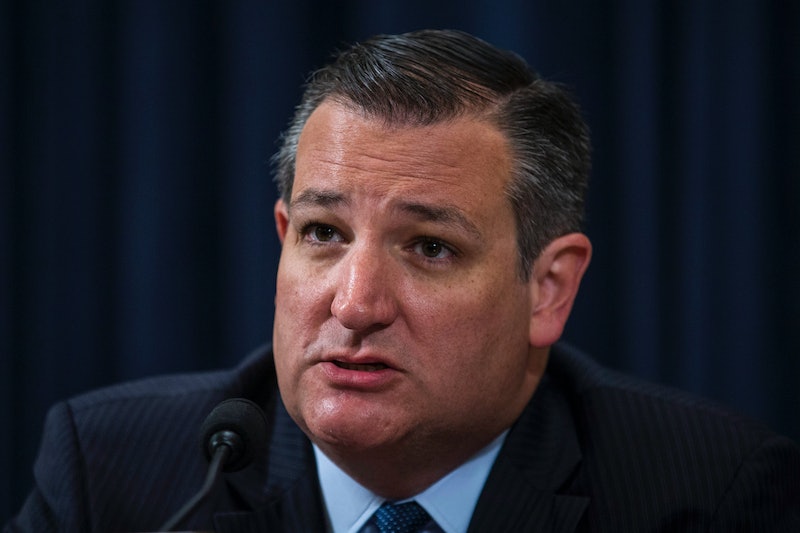 On Thursday, Texas Senator Ted Cruz turned to a pop culture reference, albeit one that's a little past its prime, to define the distinction between the Democratic and Republican parties. In doing so, he set off a storm of mockery on social media. If you were on Twitter Thursday, you've probably already noticed all the tweets and memes of Cruz's bad Simpsons analogy.

Cruz made the remark at the 2018 Conservative Political Action Conference, better known as CPAC. Addressing an assembled crowd of Republicans, conservatives, and right-wing activists, Cruz compared the Democrats to the bookish, kind-hearted Simpson family daughter Lisa, while claiming that the GOP is "happily" the party of Homer, Bart, Marge, and Maggie.

"I think the Democrats are the party of Lisa Simpson," Cruz said, responding to a question about how The Simpsons reflects American politics. "And Republicans are happily the party of Homer, and Bart, and Maggie, and Marge."

Needless to say, plenty of fans of The Simpsons have taken issue with this description, not so much because of the part about Lisa ― whom the show does present as a socially conscious, vegetarian, and among her family unusually inquisitive person. Rather, a lot of the complaints have been about Cruz claiming the rest of the family for the Republicans; even The Simpsons showrunner Al Jean hit back on Twitter. Here are some of the choicest memes and mocking reactions.

1. We've Inherited Quite A Budget Problem

This is no joke! All the way back in 2000, the episode "Bart to the Future" featured a grown-up Lisa as president, and she (amusingly, at the time) noted that she's "inherited quite a budget crunch from President Trump."

The Springfield Republican Party is not exactly overflowing with members.

3. Maggie Did Once Shoot A Man

Sorry, but it's not a spoiler anymore after 23 years.

Sideshow Bob, one of the most popular villains on The Simpsons, notably once ran for mayor as a Republican and won by way of massive electoral fraud. While angrily confessing in a bout of courtroom egomania, he gave the above explanation for why he did it.

"If he thinks George Bush'll stay out of the sewer, he doesn't know George Bush."

6. A Fan Of Birch Barlow

If there's anything working in Cruz's favor, it's definitely the fact that Homer appears to be a loyal listener of Springfield's Limbaugh-esque conservative radio host, Birch Barlow.

7. Can't Wait For The Republicans To Run

Suffice it to say, Mr. Burns was not a responsible gun owner.

Anna Maltese, a former animator on The Simpsons, had a pretty strong take on Cruz's claim; she maintains that Lisa is the family's conscience, and that neither Homer nor Marge are Republicans. Although, depending on how you view authorial intent, this might not mean anything.

9. Ted's The One Who Could Use A Pacifier

Jean, who started off as a writer on The Simpsons and has been its showrunner since 2001, offered up a pretty pointed response to Cruz.

It's fair to say that the people behind The Simpsons don't seem like big fans of Cruz.

11. You Are Lisa Simpson

Cruz might well be right that Lisa is the most explicitly liberal character on the show, even though his other takes have drawn some considerable derision.

Basically, as has been apparent since Cruz uttered the remark, Twitter is having a pretty good time roasting Cruz for the comparison. It's no secret that the Texas senator is a fan of The Simpsons, or at least he claims to be. Although you could probably find a better use of time than subjecting yourself to his truly, truly awful impressions of characters from the series, watch them here if you dare.