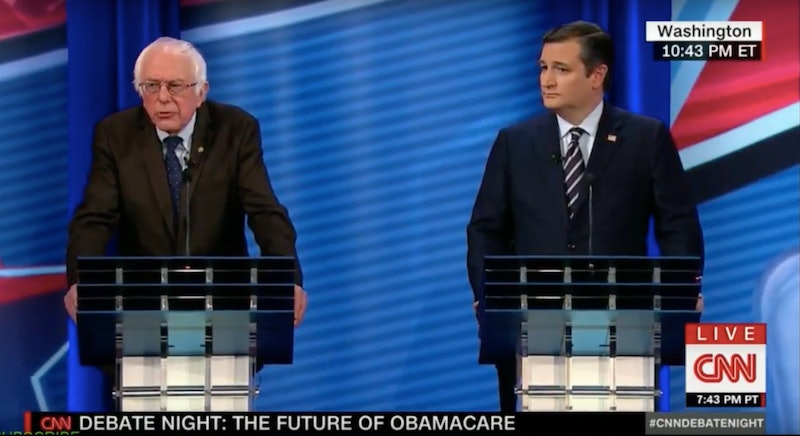 On Tuesday, CNN's debate over the future of the Affordable Care Act between former presidential primary candidates Sen. Bernie Sanders and Sen. Ted Cruz was running pretty smoothly — that is, until Cruz's folksy "more cowbell" closing statement. Some of his concluding words on stage included an unfortunate, ill-fitting reference to the well-known SNL sketch featuring Christopher Walken, where he famously shouts for "more cowbell!" In theory, Cruz was using the sketch to argue something about how Sanders was like Walken's SNL character in the healthcare debate by calling for "more" sensible reforms to the existing Affordable Care Act rather than an all-out repeal; In practice, he's just aggressively unfunny.

My theory is that Cruz, huddled over a steaming hot can of soup, was mentally prepping himself for the debate, trying to decide how exactly he'll compete with Sanders, darling of millennials. Until, that is, he received a chain email sent from a friend (via the Yahoo email account he set up in 2004) with a link to that video. Immediately, he knew what he had to do — recycle the joke he made about Obama in January 2015.

Of course, any time Cruz tries to cling to a cultural artifact in public it is deeply and viscerally uncomfy (remember his attempt at a Simpsons impression while pandering to the youths at BuzzFeed during the Republican primaries? I still have night terrors about it.) — but, luckily, the Internet is also usually there in these trying times to soften the blow with wit, shared-discomfort, and devastatingly fast photoshop skills.

Some Things Just Cannot Be Unseen.

You were too preoccupied with whether or not you could, you didn’t stop to think if you should.

But, it's cool, we don't kink-shame here.

It's Too Late To 'Pologize.

Texas, come get your boy.

I'd call a doctor for this burn, but I'm not sure if I can afford the co-pay.

Someone tipped him off that the human youths like "the SNL."

Just make sure he can have his soup and he'll be fine.

No, seriously, did it work?

Nothing to see here. Just a human guy with human skin, interested in human popular culture. Move along.

Apparently, He Warned Us.

We should've seen it coming, I guess.

Once again, Ted Cruz-Internet, you're the true heroes. This night is yours.