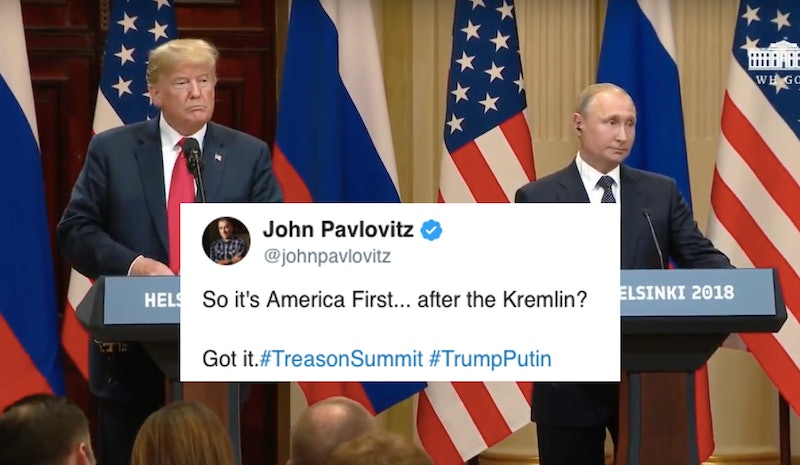 Ahead of Donald Trump's and President Putin's first official summit, speculation about the possible successful, or catastrophic, outcomes ran wild. In perhaps the internet version of a vote of no-confidence, Twitter used the hashtag #TreasonSummit, as Trump and Putin shook hands in Helsinki, Finland, on Monday.

#TreasonSummit started popping up just hours before the two leaders' scheduled meeting. Trump had tweeted, "Our relationship with Russia has NEVER been worse thanks to many years of U.S. foolishness and stupidity and now, the Rigged Witch Hunt!"

Placing the blame squarely on the United States for its strained relationship with Russia, Trump failed to mention Russia's annexation of Crimea, its interference in the 2016 election, or support for Syria's authoritarian Assad regime as some of the factors that have contributed to the tension.

Concern over the summit was already elevated this week after President Trump repeatedly criticized American allies in NATO meetings, called the European Union "a foe," and condemned President Obama's administration — and not Putin — after Special Counsel Robert Mueller issued 12 more indictments against Russian nationals for allegedly interfering in the 2016 election. Critics fear that Trump's history of praising Putin and Russia, in the current context, might indicate that Trump will capitulate to the Russian leader during Monday's meeting.

Here are some of Twitter's #TreasonSummit takes on the meeting.