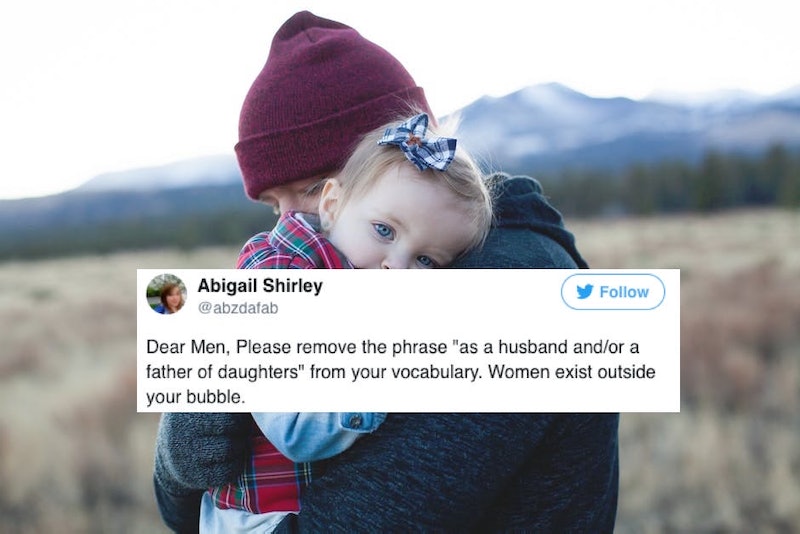 I don't have a daughter, nor am I a father. Yet somehow, I find the ever-growing pile of sexual assault allegations against Hollywood producer Harvey Weinstein nauseating. This may come as a surprise, given how often male actors have said they find the accusations repulsive "as a father of daughters," but I'll let you in on my secret for caring about the wellbeing of a group of women I've never met. All I have to do is close my eyes and pretend, for just one second, that women are people — three-dimensional humans who deserve to be treated with respect and decency on their own merits.

I know this might sound outlandish to some, but hear me out. Women do, in fact, exist outside of their relationships with men. It’s possible to feel empathy for women without thinking of them as extensions of their fathers and husbands; all you have to do is remember that they are your fellow human beings. If you still can't empathize with women after that, bigger issues are at hand.

You might think that all this goes without saying, but judging from many actors' reactions to the Weinstein scandal, it does not.

According to an investigation by the New York Times, the well-known producer allegedly sexually harassed or assaulted numerous women, including well-known actresses Ashley Judd, Gwyneth Paltrow, and Angelina Jolie, over the past 20 years. Given that Weinstein has been a powerhouse in Hollywood for several decades, it is no surprise that the allegations have rocked the movie business. Dozens of workers in the industry expressed sympathy for the women involved, with most claiming they were totally blindsided. (In a statement, the Weinstein Company Board said the allegations came as an "utter surprise.") Among women in Hollywood, the comments tend to stop there. Many men, however, have trotted out the same tired, old line: As fathers and/or husbands, they are shocked and dismayed.

The denizens of Twitter have noticed this, and their responses are pure gold.

The tweets seem to have been spurred on by a recent Matt Damon interview. When speaking to Deadline about reports that the actor helped kill a 2004 expose on Weinstein, Damon and the interviewer both brought up their daughters when discussing the allegations. "As the father of four daughters, this is the kind of sexual predation that keeps me up at night. ... You have a daughter, you know," Damon said.

The implication is that having daughters is a sort of "get out of jail free" card. Of course he finds the scandal abhorrent. Unlike those cold-hearted monsters who don't have daughters, he has to worry about something similar happening to his own girls.

As a whole, the "father of daughters" argument suggests that it takes fatherhood or marriage to truly sympathize with women. (Until then, I suppose, women are viewed as living, breathing Barbie dolls.) As one Twitter user explained, "Men only humanize women when things affect women in their lives. They can't see our perspective until their daughters go thru [sic] it."

But that's not the only tweet to hit the nail on the head. Some pointed out that if you're going to bring up daughters, you can't leave out the sons that may grow up to hurt them.

Others took a more lighthearted approach.

One perceptive user compared "father of daughters" rhetoric to the promises of "thoughts and prayers" that flood social media after every mass shooting. Both platitudes are overused in the wake of tragedy and, ultimately, do little to solve the problem.

Given how often men have resorted to the "father of daughters" point of view in the past, these kinds of comments won't vanish anytime soon. Then again, as a father of zero sons, I can't really sympathize with the masculine point of view. Who knows? Maybe one day, men will see women as individuals, rather than extensions of themselves.