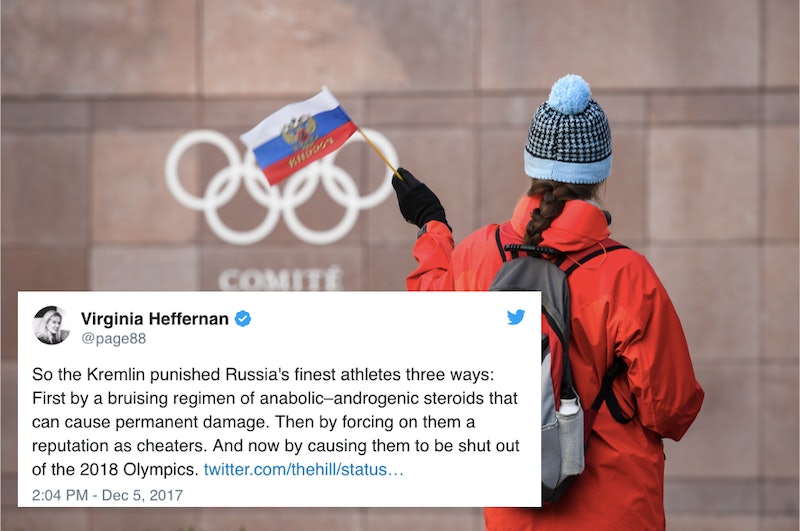 On Tuesday, the International Olympic Committee announced that, as punishment for its systematic doping program, Russia is banned from the 2018 Winter Olympics. Twitter responded to the announcement with a mix of shock over the severity of the punishment, and plenty of speculation as to how Russia will respond.

It's an unprecedented move on the IOC's part — no country has ever been punished so severely for doping before. However, Russia's extensive doping tactics were part of a sweeping state-run program that IOC president Thomas Bach called an "unprecedented attack on the integrity of the Olympic Games and sport."

The ban means that neither Russia's national anthem nor its flag will make an appearance at the opening ceremony. Some clean Russian athletes will be allowed to compete "under strict conditions," according to the IOC statement, but they will have to participate without a Russian uniform, instead wearing one bearing the name "Olympic Athlete from Russia." Following news of the ban, Reuters reported that Russian state media announced it will not broadcast the Olympics without the nation's team participation.

Many tweets about the news centered criticism on the Kremlin and President Vladimir Putin, and expressed sympathy for Russian athletes who will not be allowed to compete for their country.

Sen. Chuck Schumer, who has been openly critical about Putin in the past, tweeted:

Hooray for the 2018 Olympic Committee. Putin is a bully & the only way to stop him is to stand up to him.

Others joked about how President Trump — known to have publicly defended Putin against the odds and sided with him over U.S. intelligence agencies' findings — would respond on his Russian counterpart's behalf.

An investigation into the Russian team's conduct during 2014 Sochi Olympics revealed how extensive the government-backed doping program was. The Russian sports ministry allegedly gathered a group to tamper with more than 100 urine samples so that they wouldn't show evidence of steroid use among its top athletes. The IOC has rescinded medals from dozens of Russian athletes and is still in the process of doing so, The New York Times reported.

Some people on Twitter contrasted the IOC's ban on Tuesday with the U.S. government's response to Russia meddling in its presidential election.

In its statement on Tuesday, the IOC said:

The systemic manipulation of the anti-doping rules and system in Russia, through the Disappearing Positive Methodology and during the Olympic Winter Games Sochi 2014, as well as the various levels of administrative, legal and contractual responsibility, resulting from the failure to respect the respective obligations of the various entities involved.

It's not the first punishment the IOC has doled out to Russia over this controversy. In 2016, while the IOC decided against the World Anti-Doping Agency's recommendation that it issue a blanket ban on all Russian athletes for the 2016 Olympics, it did ban those with previous doping suspensions.

We believe that the principle of collective responsibility is hardly acceptable.

Russia's ban from the 2018 Winter Olympics raises a question about another massive international sporting event — the 2018 World Cup. Vitaly Mutko, the top Russian sports official during the 2014 Sochi Games who was directly implicated in the doping investigation, is president of the Football Union of Russia and is organizing the World Cup next year that's set to take place in Russia. Mutko has been given a lifetime ban from the Olympics.

As part of the sweeping punishment for its widespread doping on Tuesday, the Russian Olympic Committee was also fined $15 million. Russia will likely launch a legal appeal against Tuesday's ban.