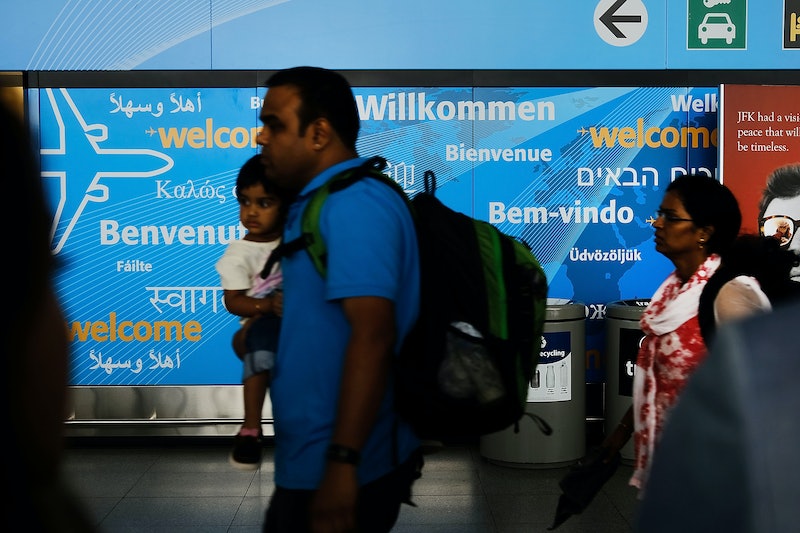 On Monday, the Supreme Court agreed to hear the case over Donald Trump's travel ban targeting six Muslim-majority countries. Although lower court rulings had halted the executive order, the Supreme Court ruled that until the case is decided, the ban will apply — but only to people who lack a "bona fide relationship" to a person or entity in the United States. The problem is that nobody is 100 percent certain what exactly "bona fide" means.

"This is totally uncharted territory," Stephen H. Legomsky of Washington University Law, who specializes in immigration law, tells Bustle. "I'm not aware of any other example anywhere in law, not just immigration, where legal consequences turn on whether you have a 'bona fide relationship' with somebody. So, it's very difficult to predict any time a court has so much latitude to decide results that are often going to hinge on the inclinations of a particular judge." Legomsky later added the caveat that the "bona fide" language is actually similar to dealing with a child out of wedlock's relationship to a father in immigration cases, but even that wasn't a good example here.

Immigration lawyers are still waiting for some guidance from the Department of Homeland Security on the specifics of who the ban now applies to.

"I think we may see similar [situations], where individuals who should fall under the 'bona fide relationship' exception and not be subject to the executive order will still nevertheless be detained in airports," Melissa Keaney, a staff attorney for the National Immigration Law Center (NILC) tells Bustle. "We're already preparing template habeas petitions in the event that individuals are being detained at airports, kind of similar to that 30-hour period after that first executive order when there were just habeas petitions being filed across the country like every minute for individuals who were being detained."

Immigrant advocates say they are prepared to follow the law as the Supreme Court has temporarily ruled, but they accept that their reading of it could conflict with the government's — and that could lead to further legal issues. "The way we read the court decision, it's pretty clear that refugees should be continued to be resettled, given their ties to the US," Melanie Nezer, Senior Vice President for the Hebrew Immigrant Aid Society, tells Bustle. "But that's gonna depend on how the administration interprets that language, and then we'll of course figure out how we're going to respond to that."

For the moment, immigration law experts agree that it is still hard to say how extensive the implementation problems will be — especially with language like "bona fide" setting the bar. "To me, the single most important qualifier in all of this is that it is such uncharted territory that much will depend on the predilections of the individual judge," says Legomsky.