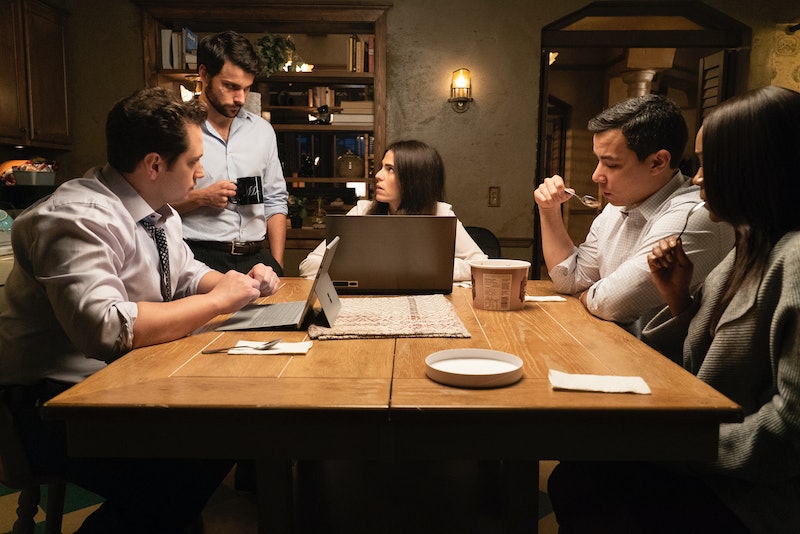 How To Get Away With Murder is a mystery wrapped in an enigma, and the hits just keep on coming. Not only did Bonnie and Nate kill Bonnie’s boyfriend, Ronald, and are now in the process of a cover up, but viewers found out that Gabriel, the mysterious new student at Middleton, is actually Sam’s son. Like, Sam, Annalise’s late husband — the one her students killed. Gabriel is Sam’s child from his first marriage to Vivian Maddox, and so lies a new mystery. There are so few clues and theories about Vivian Maddox on How To Get Away With Murder that many fans have to take to thinking themselves.

Let’s add this kid to the ever-growing list of Sam’s lies. He knew that he had a son because after Sam left Vivian for Annalise, Annalise and Sam had an accident that killed their unborn son. Sam pretended to go to his sister’s house to sort himself out, but really, he was trying to get Vivian to let him see Gabriel, the son he ignored up until, well, then. Sam knew all about his son, but it’s hard to say how much Gabriel knew about him. Gabriel still thinks, from the sounds of his conversation with Annalise, that Sam wasn’t a trash human. (Spoiler alert: he was, because “why is your penis on a dead girl’s phone?”.) But all will be told as the season progresses, especially since Gabriel told someone on the phone that he “screwed up” and that they know who he is. Say what? We know so little about Vivian and Gabriel’s early life, but, heck, we can speculate.

Vivian Is Dead & Gabriel Is There To Avenge Her Death

Gabriel transferred very quickly out of the law program he was in and nearly complete with to be in Annalise’s class, and he knows who Annalise is and that Sam was his dad. Perhaps, after Sam left her, Vivian broke down and eventually passed away. Gabriel lost his mom and his dad in one fell swoop, and now, he’s found Annalise and he wants the women who took his father away to pay. It’s not rational, but it is understandable. We haven’t heard anyone talking about Vivian in the present tense, have we?

Reddit user AnotherLuisD thinks that How To Get Away With Murder’s continuing return to the car crash means that there has to be more to it. “Sylvia Mahoney implied that there’s more to the [crash] story,” the user writes, so it could mean that Vivian Maddox was involved. It would be one heck of a way to get revenge on your lying husband and his new wife.

Eve, played by Famke Janssen, is Annalise’s old girlfriend from college. She was the one that Frank was talking to when he said that Gabriel was at Middleton. Eve also was the one who intercepted the “please take me back” email that Sam sent to Vivian so many years ago and gave it to Frank to tell Sam to knock this all the heck off. Gabriel has a copy of that email. He either got it from his mother or Eve, but why not both? Eve could be working against Annalise. Or trying to get her back. This is all very confusing.

Annalise Knew All Along & Was Waiting For This Day

Annalise claims that she didn’t know Sam had a son from his first marriage, but she does know that she was the other woman. That’s never been argued. Annalise isn’t the most trustworthy person in the world, so she could be lying, especially after seeing a student with the last name of “Maddox” in her class. Reddit users like Edith31 say that it seems improbable that a nosy, investigative woman like Annalise wouldn’t know about her husband’s former life. Annalise could have been waiting for the other shoe to drop for years.

Of course, these are all theories about Vivian Maddox, and only one thing is for sure — plenty more questions will pop up before How To Get Away With Murder fans get all the answers they need.