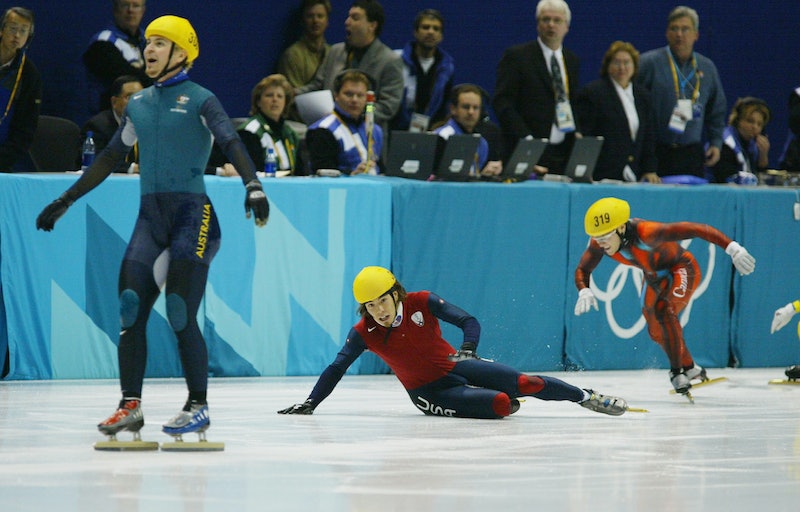 One of the best things about the Olympics is that it can result in amazing and totally unexpected moments that quickly become history. Announcers, coaches, and other experts can speculate and assume all they want, but sometimes things just don't go as planned, and that's when they become epic. Right now, Twitter users can't stop talking about one of those amazing Olympic moments: Specifically, a 2002 Winter Olympics speed skating accident that is the perfect example of the best kind of Olympics history.

Here's the story, in case you don't remember: Back in 2002, Australian athlete Steven Bradbury shocked viewers when he won what even the official Olympics website calls "the most unexpected of gold medals." Competing in the five-man final for speed skating, Bradbury was the "rank outsider" who seemed destined to lose... by a lot. Like, he was in last place for the entire race. But during the very last bend around the ice, he got lucky: Lia Jiajun from China tried to overtake Apollo Oho, sending them both crashing to the ice. The fall also brought down Mathieu Turcotte from Canada and Ahn Hyun-soo from Korea in the process, leading to a four-person pile-up that only one speed skater was exempt from... Australia's Bradbury. As the video footage of the event showed, Bradbury was the only one who stayed up (because he was so far from them when they crashed), and with his competitors on the ice, he glided across the finish line to win the gold.

It's hard to say what was better: the way Bradbury won, or his reaction. At first, Bradbury seemed totally nonplussed, and then as he realized what just happened, he looked like how everyone else felt: "did that really just happen?!" This weekend, as speed skating events took place during the PyeongChang Olympic Games, Twitter users brought the moment back. Check out some of the funniest tweets and memes about this epic gold medal win:

1. The Full Moment Is Worth Watching:

It's one of those videos that makes you scream out loud no matter how many times you watch it.

Look at the sheer joy on this guy's face!

3. One User Gave Us A New Catchphrase:

Honestly, saying this all the time now.

4. Another Reminded Us That It Already is One:

5. Some Pointed Out This True Statement

Hey, sometimes it's true. And that's not to say that Bradbury didn't work hard, but still — it's hard to deny that he got lucky that night.

6. Others Made Another Good Point About Bradbury:

A lot of people have criticized Bradbury for winning the way he did, saying he didn't really deserve it. Some users on Twitter pointed out that he was at the Olympics, and he got there for a reason — he's clearly talented.

It's very adorable and on brand.

8. Users Have Started Calling Him A "Hero"

It's definitely a very iconic moment.

9. Some Users Pointed Out Other Interesting Facts About Bradbury:

There doesn't seem to be any evidence that this was Bradbury's tactic (even he seemed shocked at the win), but a lot of users bring this up.

11. And Some Reflected Back On What They Were Doing When It Happened:

Which is valid. It's a good joke!

13. Some Have Used It As An Example Of Why You Should Never Give Up

14. Many See Him As A Source Of Inspiration And I Can't Help But Agree

Bradbury is a perfect example of the inspiration that can come from the Winter Games — and of the amazing viral moments we can be gifted as well. Honestly, I can only hope that the 2018 Olympic Games give us a moment that's nearly as epic as this one. It's part of what makes watching this event so exciting.