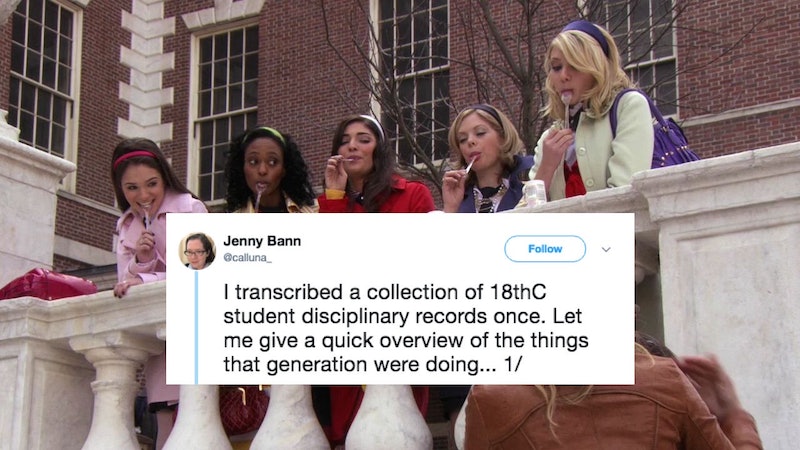 Millennials have been blamed for killing many things: chain restaurants, department stores, middle children, the list goes on. And you would think that because we Millennials are getting older, the time of us being blamed for adapting to the world around us and for problems that are actually systemic would be ending. But not quite yet. A university professor recently published an article about why Millennial students are The Worst, and in reaction, an academic on Twitter wrote a thread about how 18th century students give Millennials a run for their money.

You probably never thought much about what college was like in the 1700s, but it also probably won't surprise you to hear it was a straight up mess. Obviously, there were the issues of the time — the fact that students would've just been white men being a huge one; everyone definitely smelling bad being an issue all its own — but Twitter user Jenny Bann (@calluna_) focuses on just the awful things the students did in order to contrast the anonymously published piece on Times Higher Education. For instance, sword duels.

The author of the Times Higher Education piece takes issue with students not taking their school work seriously, complaining, and being entitled. The writer finds it "difficult" to "respect them as students, as potential scholars and as thinkers." The article is odd in that it does, at first, place some blame on the university system, including the tuition debt problem and how schools are operated like businesses. But, in the end, decides the students are the real issue, even while acknowledging that they're after "The Dream" — something that, clearly, they didn't come up with on their own.

(By the way, it's unclear if the writer is talking only about undergrad students or graduate students, as well, but Times Higher Education has been posting tweets about its definition of the Millennial age range in response to the many "Um, don't you mean Gen Z?" questions.)

This is all to say, @calluna_ had a lot to be fired up about. Bann started their thread, "I transcribed a collection of 18thC student disciplinary records once. Let me give a quick overview of the things that generation were doing." (As Bann is from Scotland, it seems these examples are all from U.K. schools.) Unsurprisingly, the thread went viral, because, for one, people are so very over Millennial bashing, but also because the things these students did are really over the top in a variety of ways. A few examples:

Of course, really horrible things — from drunken immaturity to horrific crimes — still happen at universities all the time and these go beyond students complaining about assignments like "entitled puppies." Bann's examples are no match for those. But, their list does highlight how the Times Higher Education piece unnecessarily goes after Millennials as a group of people rather than solely after the current college system. Some students have always been jerks, and, as a whole, these 18th century ones just might have been harder to teach.