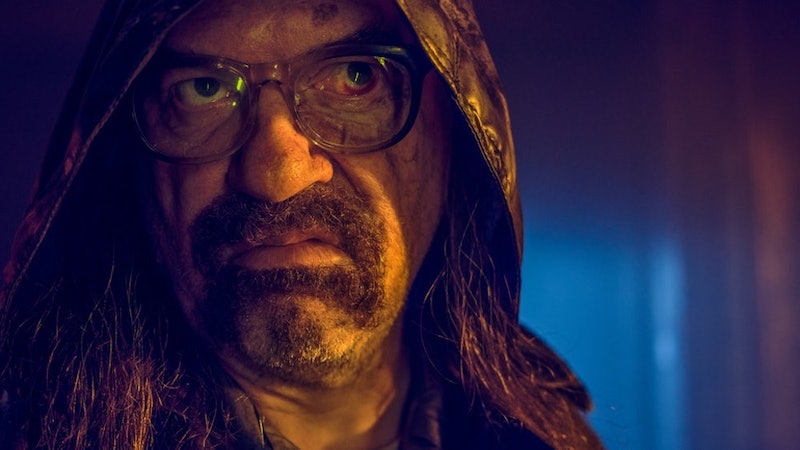 The counselors at Camp Redwood may be going through a tough time on American Horror Story (what with most of them getting murdered and everything), but, as always, fans are having a fun trying to decipher how this latest installment in the series connects to past seasons. Now, another theory has come out of the woodwork that could potentially connect AHS: 1984 to Asylum in a surprisingly new way — and no, it's not for the reason fans might think.

Despite the different themes, Ryan Murphy has always prided himself on making various characters and storylines from former seasons intertwine with each other, creating his own shared horror universe. Already this season, there have been nods to Hotel, thanks to the return of the Night Stalker, and Asylum, thanks to Margaret's shoutout to Briarcliff Manor. However, it turns out that might not be the only way 1984 crosses over with Season 2.

As Reddit user gmanz33 noticed, Mr. Jingles' house looked eerily similar to Kit Walker's place in Asylum, which is where he lived both before and after his time at Briarcliff. In fact, if you look at the two sets side-by-side, it's easy to spot the parallels, which range from the paint color on the walls to the white double doors that divide two of the rooms.

That being said, there is one major flaw to this theory. Mr. Jingles ended up settling down in Alaska with his wife and son, whereas Kit lived in Massachusetts back in 1964, making it highly unlikely (if not downright impossible) for it to be the same house. Some commenters on Reddit were quick to point this detail out, theorizing that the design team simply reused that particular set.

However, let's not forget the most perplexing storyline from Asylum: the aliens. Other fans on Reddit suggested that the aliens could have moved the house to Alaska. Logically, it doesn't appear to make any sense — why would aliens care where this house was located? But then again, the alien subplot in Asylum never really made much sense to begin with.

Perhaps the aliens from Asylum will come back in 1984. Perhaps they're responsible for the massacres at Camp Redwood, observing human behavior with some kind of twisted, killing experiment. Or maybe it's some kind of VR trial, as Reddit user OhDuvv suspects. Either way, fans shouldn't completely rule out this alien/Asylum connection just yet. On a show like AHS, anything is possible.

More like this
Netflix Shut Down 'Bridgerton' S3 Rumours About A “Very Dark” Storyline
By Bustle
This Dark 'Happy Valley' Theory Will Keep You Up At Night
By Sophie McEvoy
This Dark 'Happy Valley' Theory Is Staring You Right In The Face
By Sophie McEvoy
'RHOSLC' Star Jen Shah Refuses To Do A Post-Sentencing Interview With Andy Cohen
By Brad Witter and Jake Viswanath
Get Even More From Bustle — Sign Up For The Newsletter
From hair trends to relationship advice, our daily newsletter has everything you need to sound like a person who’s on TikTok, even if you aren’t.