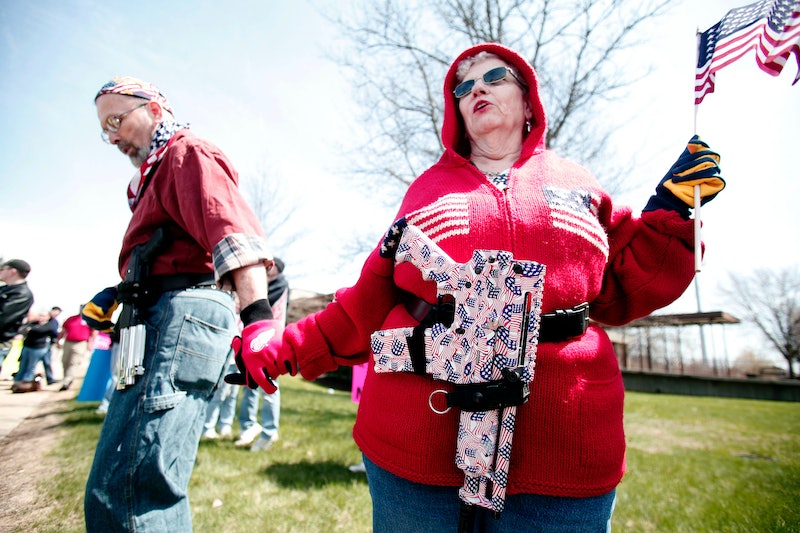 Gun violence has drawn headlines again and again in the United States, shooting after shooting. Now, a study shows that not only are the number of gun deaths higher in the country, the total number of guns are, too. According to a new survey released on Monday by the Graduate Institute of International and Development Studies in Geneva, 40 percent of the world's guns are in America.

That number becomes even more staggering when you consider that the United States makes up just 4 percent of the world's population.

In total, there about 1 billion guns in the world. Of those, only 15 percent or so are owned by the police or military. That means that of the 857 million civilian-owned guns, 393 million of them are in the United States. That's about 121 firearms for every 100 people

AFP reported that Aaron Karp, one of the report's authors, spoke at a news conference at UN headquarters on Monday. Karp said:

The biggest force pushing up gun ownership around the world is civilian ownership in the United States. Ordinary American people buy approximately 14 million new and imported guns every year.

As for why Americans own so many, Karp argues it's thanks to the U.S. gun control legislation. "Why are they buying them?" he asked. "That's another debate. Above all, they are buying them probably because they can. The American market is extraordinarily permissive."

Interestingly, the United States military and police forces do not have as many guns as others around the world. The country with the largest military and police holdings is Russia, followed by China. There may also be more than reported due to a lack transparency.

"Governments’ lack of transparency regarding their procurement, stockpiles, and transfers of small arms makes this exercise a most challenging undertaking," Eric Berman, the Small Arms Survey director, said in a press release.

Strictly comparing civilian gun ownership, the closest that any country comes to the United States is Yemen, where there is currently a civil war. In the U.S., there are 121 firearms per 100 people, whereas in Yemen there are 53 per 100. Montenegro and Serbia are next with 39 per 100. Then it's Canada, Uruguay, and Cyprus, each with 35 per 100. Countries with the least civilian guns per 100 people include Indonesia and Japan, where there is less than one.

The types of firearms depends a lot on the country. The report says they are a mix of "improvised craft weapons, factory-made handguns, rifles, shotguns, and in some countries even machine guns." The number that is counted as civilian is not just individuals keeping them at their home.

It can also include "those possessed by private security firms, non-state armed groups, and gangs." The report argues that's overall a small part of the total but can "be disproportionately used in armed violence."

Craft weapons are one of the hardest to tally because they are often made by the owner and aren't necessarily registered. "The term usually refers to guns made from improvised parts such as pipes and scrap metal in small workshops, typically unregistered and uncounted by the authorities," the report reads.

The Small Arms Survey was conducted using gun registry data in 133 countries and surveys conducted in 56. The reason that both sources are used is due to different problems that arise with each kind. There are some countries that include other weapons, like knives, in with their gun statistics. Other countries allow older guns to fall off registries and therefore, the statistics. Surveys include the biases of the owners, potentially underreporting.

What is clear, regardless of the way the numbers were gathered, is that the United States has far more guns than anywhere else on earth.