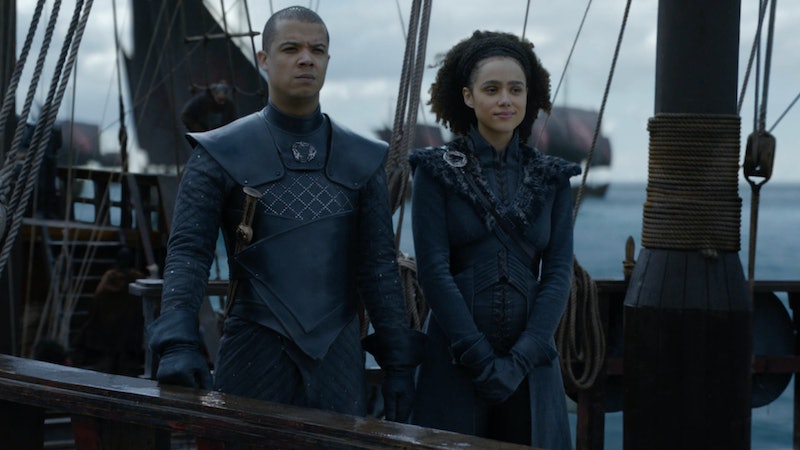 If you’re looking for another reason to be disappointed by Game of Thrones — in case the show’s final season wasn’t underwhelming enough on its own — perhaps this newest study will be of unsatisfying service: a recent analysis of the series found that 73% of the lines in Game of Thrones were spoken by men. Despite its abundance of strong female characters and plot lines driven by the women in the show, female characters only accounted for 27% of the speaking time across all of the show’s eight seasons. (Worse than the industry average of 29%.) However, the study fails to mention something I can’t quwhite put my finger on…

Just kidding, it’s people of color. Nowhere in BBC’s gender analysis of Game of Thrones are race, whiteness, or people of colored even mentioned. Unfortunately, this is far from surprising to anyone who’s seen the show; dragons, dire wolves, spooky shadow babies, and White Walker armies all seem to have significantly more screentime than the ever-elusive “character who isn’t white.”

It is worth noting that it was beyond the study’s vocal technology to differentiate the race of who was speaking on the show. The study’s data was compiled by Ceretai which BBC describes as “a start-up which uses machine learning to analyze diversity in popular culture.” As noted in their analysis, “Their algorithm has learned to identify the difference between male and female voices in video and provides the speaking time lengths in seconds and percentages per gender.” While the machine doesn’t identify gender with 100% accuracy — (“The accuracy of this algorithm is about 85%, so figures could be slightly higher or lower than reported.”) — nor does it account for genders beyond “male” and “female,” the gender disparity noted highlights a lack of equality in the show’s speaking lines.

However, in a study about diversity, it’s strange not to call out racial diversity whatsoever, given Game of Thrones contentious relationship with characters of color or lack thereof.

When we talk about diversity, especially in terms of media representation, it’s impossible (and harmful) to separate conversations about gender from those about race. Simply put, women of color don’t get to separate their gender from their race. This is Intersectionality 101.

Missandei is the only character of color listed in the top 30 characters with the most lines for the first seven seasons. Though we may be able to list the handful of recurring non-white characters in Game of Thrones — Khal Drogo, Grey Worm, Oberyn, Ellaria, the Sand Snakes — we didn’t see or hear much from them. (Though we see Grey Worm, portrayed by Jacob Anderson AKA Raleigh Ritchie, a significant amount, especially in this last season, he’s not much of a talker.)

“We are not doing this to make people stop watching, but to make them aware of the fact that it’s an unfair representation of the world,” Lisa Hamberg, whose team conducted the Game of Thrones speech analysis of the series, said. Likewise, questioning why the show has so few characters of colors in speaking roles is not meant to belittle anyone’s enjoyment of the show. You can like A Thing while still questioning A Thing.

“Even though we already knew men get more screen time than women, the results still surprised us,” Sooji Kim, the study's web optimization manager, said. “No matter how we sliced the data, we still found that female characters consistently had less visibility.”

“The public perception is that female Game of Thrones characters are very strong and prominent, even when they are on screen less and have fewer speaking opportunities,” Sooji Kim also added. “Are powerful women [on screen] so rare that they leave such an impression in our minds, so even when they're not present, they still stand out?"

People of color have been notoriously absent from major sci-fi and fantasy franchises. Lightsabers, hobbits, and zombies? Sure! A non-white character with a developed backstory and significant dialogue? Not plausible!

Dylan Marron’s Every Single Word is a Tumblr dedicated to editing popular movies across all genres down to lines solely spoken by any person of color. The results, as you may expect from such a site needed to exist in the first place, are disappointed.

One person asked the Marron a question that these conversations often lead to: how can a white writer go about writing characters of color and are they even “allowed” to do so?

“If you choose to write characters who are specifically people of color then do your work to listen to real people who are like your character,” Marron responded. “The end result will be nuanced and honest. And if you’re just writing characters who are human, I challenge you to write complex, wonderful, vibrant humans. And, when it comes time, don’t cast white people by default.”

Also, hire directors of color. Hire editors of color. Hire people of color at all stages of a project. Media representation matters beyond who we see on screen. Inclusivity at every step along the way will help lead to a reality where all stories are seen and heard.