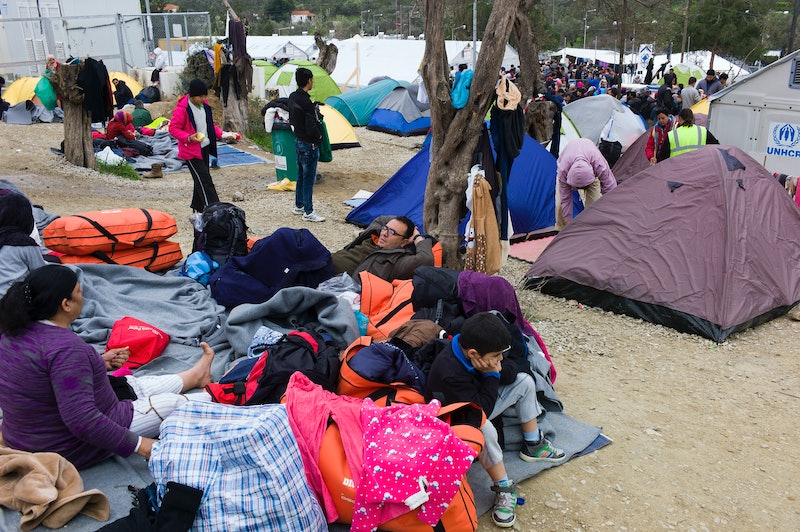 Apps can help you get a date, get dinner delivered, and get a car to the airport when you realized your massive rolling bag can't do subway stairs. But believe it or not, apps can also help doctors from around the globe provide care to Syrian refugees — or at least one in particular can. Tech advancements are providing a platform that helps doctors treat refugees in Lebanon through the free app Figure 1 targeted at the medical community.

One of the purposes of the app is to provide instant medical support to doctors are faced with high-risk patients as well as doctors in Syria or other war-torn countries who may be providing quick care outside of traditional hospital settings.

Bustle spoke with Dr. Rogy Masri, who treated Syrian refugees seeking asylum in Lebanon through Doctors Without Borders about his experience, and how apps, like Figure 1 can bolster the global medical community.

"The programs we implemented were used as a blue print in other parts of Lebanon and even in other countries impacted by the largest refugee crisis of our time," Masri told Bustle of his six month program in Lebanon. He hopes the course of care that he and his colleagues implemented can be replicated in other countries — and part of that is using apps that connect doctors throughout the globe.

"Figure 1 as a way to get a second opinion from a colleague at any time," Masri said. "There are so many users and they are always quick to help guide your treatment plan. In a resource-poor environment, that might be the difference between life and death."

"I've been using Figure 1 for nearly 2 years now," Masri said, "At first I thought of it as an interesting app, but now I realize that it’s much more powerful than that."

While Masri said he first downloaded the app to skim pictures and connect with doctors, during his time abroad it served a greater purpose. "Because of the war, many of these refugee populations now have sparse access to care, if any at all," Masri explained. "Apps like Figure 1 can be a tool for providers to talk to that specialist that they'd have no access to otherwise. Where accessibility is limited, apps like it can enable safer and more up to date treatments through information sharing."

I've heard this same story, of children dying because they went back to Syria to look for work, or a father that had disappeared trying to cross the Mediterranean."

The UNHCR, the United Nations main refugee agency, reported that Lebanon is currently hosting more than 1.1 million refugees. That places them as one of the top three countries hosting refugees, right behind Pakistan and Turkey.

When asked whether he had any patients in particular who stuck with him, Masri shared how many people's stories are now impressed upon his brain.

"There are countless stories that have become part of the fabric of my existence," Masri tells me. "Families who were once wealthy and well-educated in Syria fled their homes because they were being persecuted. Sometimes family members buy a seat on an old Zodiac raft to cross the wild Mediterranean Sea and they would disappear. I've heard this same story, of children dying because they went back to Syria to look for work, or a father that had disappeared trying to cross the Mediterranean."

Masri shares that while he's no longer working in Lebanon, he still regularly keeps in touch with other doctors through the app in order to dispense advice and share resources.

As a practicing critical care specialist, I can tell you that it’s very possible to feel isolated even in the busiest hospital in a major city.

The founder and CEO of Figure 1, Dr. Joshua Landy, says he hopes the technology harnessed by the app will continue to bolster the medical community that spans the 190 countries it's available in. Landy tells Bustle that what many people, especially Americans, may not realize is that the app is needed not just for doctors working abroad, but for those here in the United States struggling to care for patients.

"lt’s humbling to see physicians like Dr. Masri using Figure 1 to access the resources and specialists they need in remote areas," Landy says. "But also, as a practicing critical care specialist, I can tell you that it’s very possible to feel isolated even in the busiest hospital in a major city. That’s one of the reasons we created Figure 1 — to connect healthcare and democratize medical knowledge so that it doesn’t matter where you’re practicing, whether it’s in northern Lebanon or Manhattan."