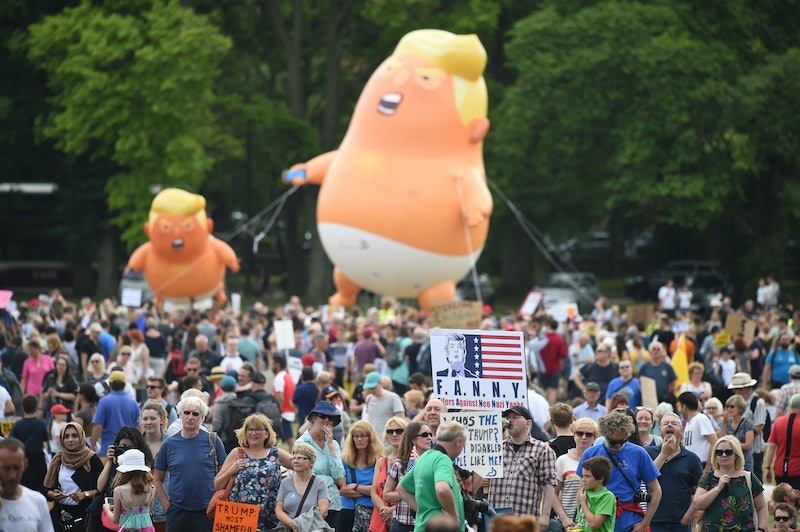 Trump's plans for a military parade continue full swing ahead with between 5,000 and 7,000 active duty personnel participating in the spectacle that could cost upwards of $12 million. But that doesn't mean every American agrees with the plan. Now, there are plans to bring the Baby Trump balloon to the military parade as a form of protest. A GoFundMe campaign started to ensure the Baby Trump is "flying over our nation's capital during Trump's military parade on November 10."

So far, just under $9,000 of the $20,000 goal has been met. But there's still plenty of time before November to bring the Baby Trump stateside.

The campaign organizers painted the blimp as the ideal counterweight to a military parade:

Donald Trump plans to beat the drums of war down the streets of our nation's capital. While he tries to show how macho and strong he is, we will show him as the big baby he is.

These organizers could follow in the footsteps of New Jersey activists who plan to fly the Baby Trump near the Trump golf course there, where the president spends many weekends in the summer. They raised money on GoFundMe, too, and then got permission from the British activists to recreate the balloon.

The group that's raising money for the balloon is called CODEPINK. They're organizing a peace concert on the National Mall the night before the military parade. "We will hold a massive festival that uses music and art to counter Trump’s national military parade that is scheduled to take place the next morning," the organizers' site reads.

The group a women-led grassroots organization and they work to "end U.S. wars and militarism, support peace and human rights initiatives, and redirect our tax dollars into healthcare, education, green jobs and other life-affirming programs." The concert and balloons are just one of several actions they plan throughout the year.

In addition to the festivities and concerts that night, the group plans to display a banner that runs the length of the mall, from the Capitol to the Washington Monument. Any extra money from the balloon GoFundMe will go to the group's peace concert preparations.

The balloons were originally deployed in London during Trump's visit to the UK. Now the organizers there, many of whom work for environmental charities, have decided to share the iconic Trump balloons. In addition to supporting initiatives like the one in New Jersey, there has also been a UK fundraiser to help be blimps go on a world tour.

"We've had countless requests for Trump Baby to visit countries all over the world under threat from a visit from the orange terror," the fundraiser page for the original balloons now reads. "So — let's fund a global travel fund for Trump Baby and ensure a global rolling trolling of everyone's least favourite pop-up tyrant. The more generous donations we receive, the more places Trump Baby can go!!!"

In addition to the world tour, there are also demands from museums in London to place the balloons on permanent or temporary display following their attention-grabbing display during the Trump visit.

That could have inspired the plan to let the New Jersey activists make their own Baby Trump balloon instead of shipping one over from the UK. And of course, there's no chance that the blimps would be stopped at the border.

The New Jersey organizers have plans to make four in the U.S., and to display them where it will be most annoying to Trump. "We're comfortable that we're going to have the opportunity to fly the balloon in relatively close proximity to his golf club while he's here," organizer Jim Girvan told CNN.

The military parade would definitely be one of those places.