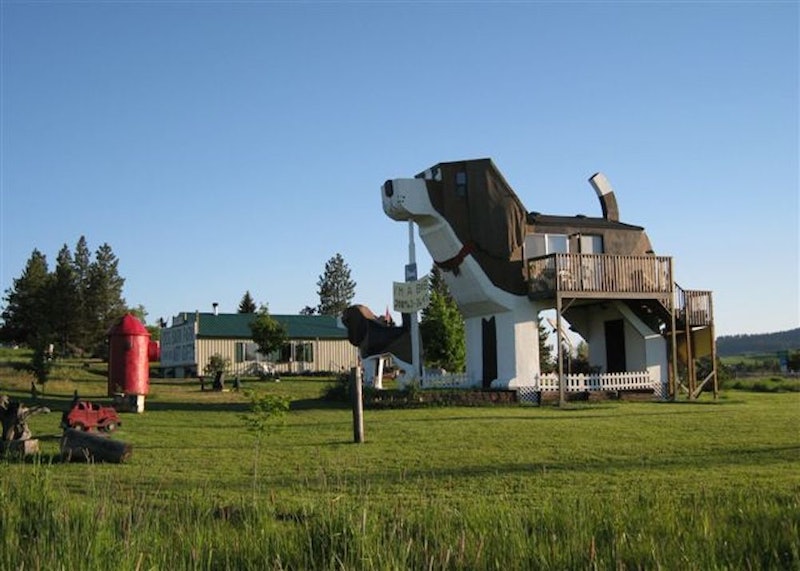 Upon hearing the phrase "beagle house," you might think of a house with a bunch of beagles in it, all running around and playing and taking cuddly naps. But, when it comes to a "beagle house" available on Airbnb, that's far from the case. In celebration of National Dog Day on August 26, the home sharing site is promoting a bed and breakfast where the dwelling is shaped like a dog. A dog with stairs and a balcony and doors and a smaller, but still very large, beagle friend next to it.

The Dog Bark Park Inn B&B is located in Cottonwood, Idaho, a town so small that when you Google it, the first picture that comes up is of the dog-shaped accommodation.

"Stay in a giant dog!" owners Dennis Sullivan and Francis Conklin say of their Airbnb on the site. "That's right, it's a beagle-shaped one-unit inn where being in this doghouse is a GOOD thing and comfortable to boot!" They explain that the lodging offers books, games, and puzzles "many of which are dog themed." Naturally.

On a less dog-themed note, snacks and breakfast are included and wi-fi is available if needed. Pets are allowed, of course, with an extra fee. The description notes that on clear nights, the second story deck is a great place for stargazing. The rural Idaho location also means views of the prairie grain fields and of the nearby mountains. The Hells Canyon Gorge, Winchester Lake, and Salmon River are in the area. There's also a downtown area a mile away with a park, coffee shop, grocery stores, and other businesses, and there's a restaurant a five-minute walk from the beagle.

The dog house can accommodate four guests and has two bedrooms — one with a queen bed and one with two twin beds — and one bathroom. Or, as the owners put it on their site, "Inside and up another level to the head of the dog is a loft room with additional sleeping space plus a cozy alcove in the muzzle." Who doesn't want to put together a dog puzzle in a giant dog's muzzle?

Given that the Dog Bark Park Inn can only take on one group of guests at a time — you get the entire beagle — it's no surprise that it books up pretty quickly. There's also the fact that the lodging season is from April to October, according to the inn's website. The next availability is for April 2020. The beagle goes for $132 per night.

Being that the giant beagle is a landmark, as well as an inn, there is a gift shop where visitors can buy carved wooden dogs made by Sullivan and Conklin. These dogs can also be purchased on their website in a very wide variety of breeds.

If you'd like to stay in the beagle, you might want to plan something else to do while you're in the area. But, there's plenty of time to figure things out. Next spring, you could be sleeping in a beagle's head under a starry sky.