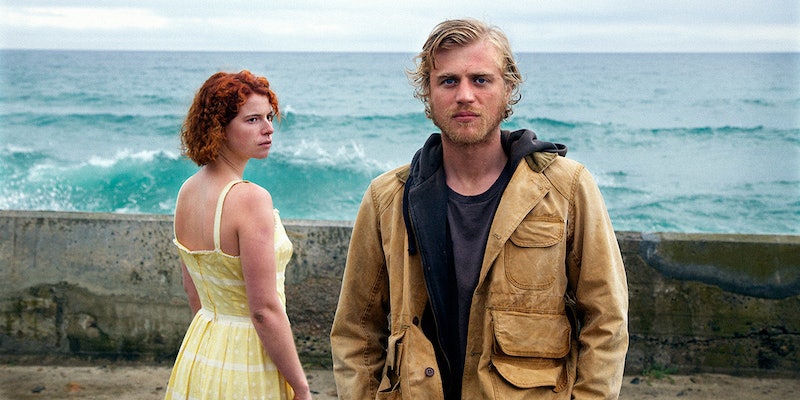 It's not easy adapting a fairy tale for a modern female audience. Dominated by beautiful, docile girls being victimized and awaiting rescue, the stories are hardly what you'd consider feminist by contemporary standards. Yet Beast, a new thriller about a girl who falls in love with a suspected serial killer, is inspired by Beauty and the Beast but manages to sidestep the story's innate gender issues by opting for a different take on the story than previous versions. The film not only gives its heroine plenty of agency, but is subversive in how it challenges one of the most important morals of the original tale — that love and unquestioned acceptance of one's partner have the power to turn a monster into a man.

Spoilers ahead. Set on the island of Jersey, Beast, out now, follows the troubled Moll (Jessie Buckley) and her relationship with the roguish handyman Pascal (Johnny Flynn). Their romance is disapproved of by Moll's family, especially her psychologically abusive mother (Geraldine James), who looks down on Pascal's working-class background. Disgusted by her family's snobbery and emboldened by her newfound love, Moll rebels against her mother and moves in with Pascal. Their relationship, however, is troubled by police investigations of a series of rapes and murders of young girls in the local community that pinpoint Pascal as a potential suspect.

Clifford (Trystan Gravelle), an officer and a spurned suitor, warns Moll to stay away from Pascal and alerts her to her boyfriend's criminal records. Eventually, the whole town turns against her, holding her accountable for her association with the accused Pascal. Moll vehemently defends her lover — even going as far as to provide him with a false alibi — and refuses to cave in to the community's pillorying, but after Pascal gets acquitted, she gradually begins to suspect that he is indeed the murderer.

To lure Pascal into confessing, Moll tells him her own past secret: that years before, she stabbed a classmate in the chest with a pair of scissors. While Moll has long rationalized this episode as a mixture of self defense and a response to years of bullying, she tells Pascal that she did it out of malice and a desire for revenge. As such, she will continue to love him despite his own crimes. Pascal, moved by the guise of her acceptance, admits to the murders telling Moll all those girls "meant nothing to him." At the end of the film, a heartbroken but determined Moll kills Pascal, strangling him with her bare hands, while ignoring his pleas that the two of them are the same due to their similar violent impulses. "We're not," she says defiantly, and with that, the Beauty kills the Beast.

In the original fairy tale and all its following iterations, utter acceptance of one's partner, including his flaws or his more "monstrous" side, was essential to the romantic union between Beauty and Beast. Beauty's unconditional love for the Beast, despite his physical appearance, was what led to his transformation back to his human form of a handsome prince. The moral of the story is unsurprising if you consider the fact that Beauty and the Beast, much like other fairy tales about interspecies romances, grappled with cultural anxieties of being married to a strange, alien other, a plight prevalent in the arranged marriages that were common at the time. Many tales probed into the angst women felt towards relationships and sex, and in the case of Beauty and the Beast, offered empathy and acceptance as a solution that would lead to a blissful marital union.

Though some scholars have argued that the original story, written and published by writer Jeanne-Marie Leprince de Beaumont in 1740, explores issues of female agency and the right of a woman to choose her own husband, there are those that contend the fairy tale still codifies and prescribes behavior regarded as acceptable for women. Selflessness and sacrifice are virtues that are championed by the tale, no matter which iteration, and unconditional acceptance of one's lover is the key to the story's happy ending — Beauty's marriage to the Beast and Beast's metamorphosis from beast to man.

In Beast, however, this trope is completely turned on its head. Here, acceptance of one's partner and all the undesirable aspects of his character, a virtue espoused by the original fairy tale, becomes a tool the heroine uses to entrap her lover. It is Moll, and not Pascal, who becomes transformed as she transitions from a meek, submissive girl under her mother's thumb to a person stalwart enough to revolt against her family and the oppressive society around her. And unlike in the fairy tale, it is Moll's empathy for Pascal's victims — an important scene in the movie has her lying on the ground where one of the woman had perished, forcing herself to endure what the victim herself had to endure — and not empathy for her lover that empowers her to confront Pascal and kill him at the end of the film.

The theme of love is still at the center of the story, but instead of championing its transformative power, as the original Beauty and the Beast and other adaptations do, Beast examines the limits of romance. Acceptance should always come with caveats, the movie argues, and love shouldn't blind us to our partners' imperfections. By challenging the central moral of the original story and offering a subtle rejection of the female virtues it idealized and prescribed — obedience, self-sacrifice, and unmitigated empathy and understanding for one's partner — Beast becomes the most feminist update of the fairy tale yet.

More like this
Revisit 1992’s 'A League Of Their Own Cast' Photos After The New TV Series
By Grace Wehniainen
At 28, Lesley Manville Was Acting, Picketing, & Singing Kate Bush Songs
By Olivia-Anne Cleary
Here’s Where Manti Te’o Is Now
By Arya Roshanian
Jonah Hill Explains How His Anxiety Attacks Will Change The Rest Of His Career
By Grace Wehniainen
Get Even More From Bustle — Sign Up For The Newsletter