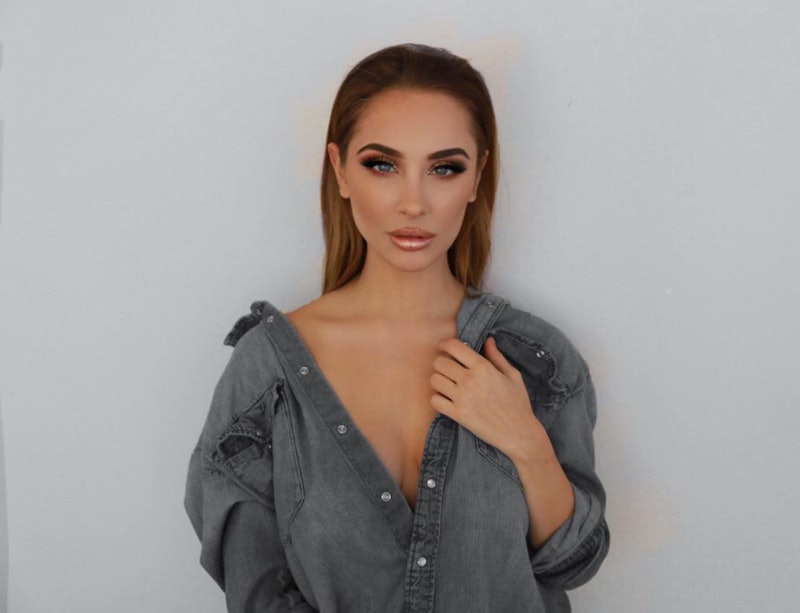 With close to half a million subscribers on her YouTube account, and over 800 thousand followers on Instagram, Gina Shkeda is quite the big deal in the makeup world... and leave it to a bona fide beauty guru like her to systematically dismantle the whole #wokeuplikethis myth.

It all started with a selfie, of course. In the midst of a luxurious a Cabo "baecay" as she jokingly called it, Shkeda posted a picture of herself looking glamorously sleepy in her bed. When one of her fans tweeted a screenshot of the post along with the caption, "If I could wake up as beautiful as Gina Shkeda I'd be the happiest girl alive," along with the hashtag "#naturalbeauty," Shkeda was quick to set her straight: She retweeted the post, and said, "Girl I have micro bladed brows, lash extensions in and lip injections - I don't even look like this." With a silly crying-laughing emoji, she signed the message off oh a high note saying, "you're flawless."

The post has since gone viral — and for good reason. Shkeda's willingness to be candid drives a real point home, and serves as a great reminder that stars, both on social media and otherwise, often put in much more time, money, and effort to their looks than initially meets the eye — and that we shouldn't hold ourselves to unrealistic beauty standards.

As of the writing of this article, it's been retweeted almost 22 thousand times, and has been liked almost 44 thousand times — and has garnered it's fair share of kissy-face, heart eyes, and praise hand emoji replies.

Even the young woman who first tweeted the photo had an adorable reply, that matched Shkeda's own complimentary tone.

Since Shkeda's a public figure with many young followers and fans, it came as quite the refreshing dose of honesty, personally.

After all, it serves as an important reminder to practice self love and acceptance, even in this new era where social media star selfies reign supreme.