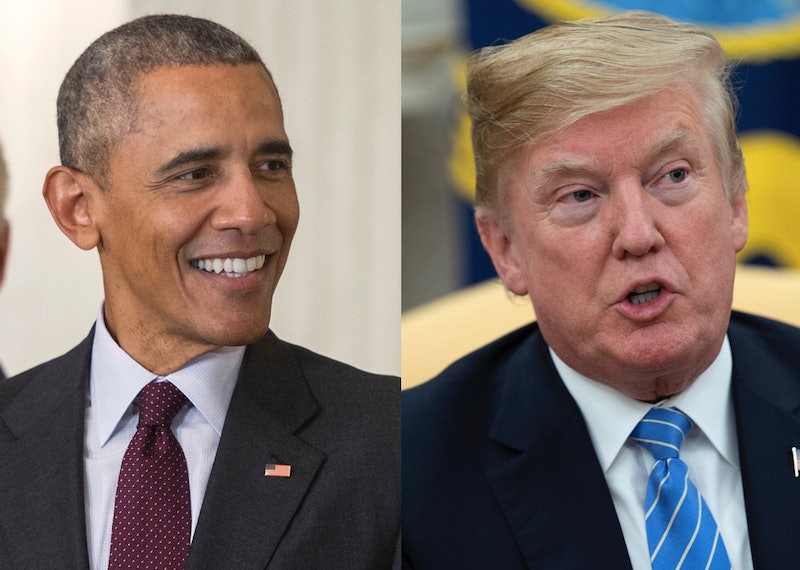 President Trump has suggested that he's no fan of Barack Obama, and by all indications, the feeling is mutual. But on Wednesday, respondents in a new presidential poll ranked Obama much higher than Trump — or any other president they've lived under, for that matter. The Pew survey finds that Obama is the most popular president Americans have lived under, while Trump doesn't even crack the top three.

The poll asked Americans which two presidents in their lifetimes have done the best job. Obama was the clear winner, with 31 percent of respondents calling him the best president they've lived under. In second place was Ronald Reagan, who 21 percent of those surveyed named as their favorite, followed by Bill Clinton with 13 percent. Trump came in fourth, with just 10 percent of respondents saying that he was the best president in their lifetimes. Rounding out the pack was John F. Kennedy, who was ranked number one by 7 percent of those surveyed.

This confirms the results of a CNN poll from May, which found that Obama is currently more popular among Americans than Trump by a rather wide margin: 56 percent or respondents said that Obama was a better president than Trump, while only 37 percent said the opposite.

Pew's findings also aren't surprising in light of Trump's own perpetually low approval ratings. In FiveThirtyEight's running average of polls, Trump has never once been ranked favorably by the majority of Americans. With the exception of the first week and a half after his inauguration, Trump has been "underwater" — meaning that more Americans disapprove of him than approve of him — for his entire presidency. His current average approval rating is 41.9 percent, compared with 52.8 percent who disapprove of his presidency.

The nature of the Pew survey meant that more recent presidents stood a better chance of being ranked number one. After all, every respondent in the poll has, by definition, been alive during the Trump presidency. Only a relatively small percentage of those polled were alive during the presidency of Franklin D. Roosevelt, though, which is probably a big reason why only one percentage of respondents named Roosevelt as one of their top two presidents.

There were clear generational divides in the survey as well. Those between the ages of 22 and 37 were much more likely than older generations to rank Obama as one of their top presidents, with 62 percent naming him as their first or second favorite. Clinton was the second most popular president among that age group. Likewise, Reagan was most highly-ranked president among Generation X, Baby Boomers, and the Silent Generation — although Generation X's preferences were closely divided among Reagan, Obama, and Clinton.

Pew has run versions of this poll in the past, and its researches noted that in general, people are relatively unlikely to name the current president as their favorite. When it conducted the same poll in 2011, only 20 percent of respondents named Obama as one of their top two presidents; now, 44 percent put him as either number one or number two.

In totality, Obama's popularity in the Pew poll rose between 2011 and 2018, while Clinton's has declined; Reagan's support has remained relatively steady, as has Bush's and Kennedy's. This is in line with previous studies, which find that presidents generally become more popular after they leave office.

The Pew survey isn't the first survey this year to place Obama ahead of Trump. In a February poll of 170 political scientists, Obama was ranked the eighth best president of all time, while Trump came in dead last.