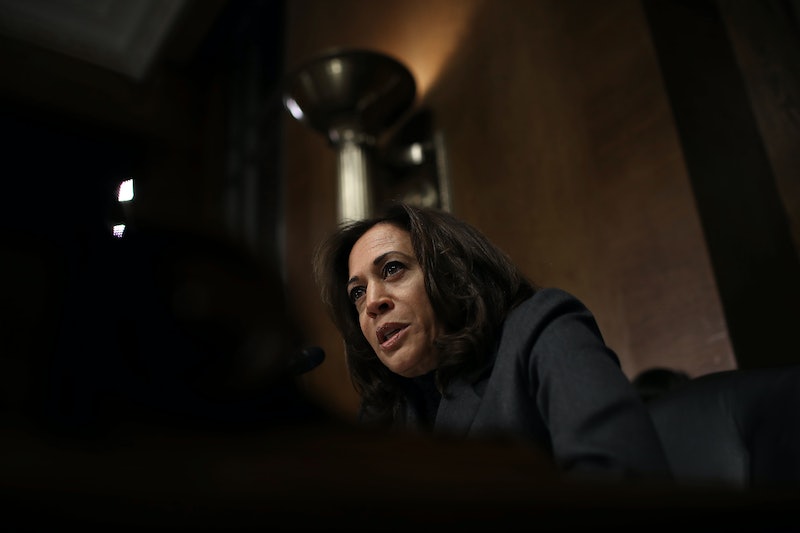 While incidents of sexual harassment in the science, technology, engineering, and mathematics (STEM) fields haven't garnered headlines in quite the same way claims coming out of Hollywood have, they've been no less real and no less detrimental. In fact, a 2018 report found staggering rates of sexual harassment across STEM fields, concluding that such behavior served as a barrier to women working in those disciplines. But 2020 presidential contender Sen. Kamala Harris is hoping to break that barrier down once and for all with a bill aimed at combating sexism in STEM fields.

"As the daughter of a barrier breaking woman in STEM research, I know the importance of ensuring more women enter and excel in this field," Harris said in a statement released Thursday. "As more women enter STEM fields, we must do more to ensure appropriate steps are taken to change the workplace climate and prevent sexual harassment."

According to Harris' office, the Combating Sexual Harassment in Science Act of 2019 would, if passed into law, authorize $17.4 million annually for research regarding the causes and consequences of sexual harassment within STEM fields. The bill, which Harris has introduced alongside Sens. Jacky Rosen and Richard Blumenthal, would also authorize research into "evidence-based practices for fostering a climate intolerant of harassment and methods for identifying and addressing incidents," a press release from the California senator's office read. The act would also direct federal statistics agencies to establish national data regarding the prevalence, implications, and nature of harassment in higher education.

Harris said Thursday that she hoped the bill would shine a light on the sexual harassment happening within STEM fields. "This legislation is a step in the right direction for fostering an environment across STEM where everyone is safe and able to achieve their full potential," she said.

In a report published last year, the National Academies of Sciences, Engineering, and Medicine claimed that pervasive sexual harassment in higher education institutions was contributing to talented individuals leaving STEM fields. In fact, the report claimed that, at 58 percent, the rate of sexual harassment found in the academic workplace was second only to that of the military at 69 percent, Vox reported. According to the news outlet, the report also found that women of color were more likely to experience sexual harassment or report feeling unsafe due to their gender.

About half of the women interviewed as part of the report — all of whom were employed in STEM fields and had reported experiencing sexual harassment — reported incidents of physical abuse, Vox reported. However, "gender harassment" manifested by crude or belittling remarks, jokes, and behaviors that aimed to create a hostile environment in which women felt inferior and/or out of place were found to be more common, Vox reported the National Academies of Sciences, Engineering, and Medicine found. Researchers believe these hostile workplace environments ultimately make it difficult for women to excel and advance in STEM fields, with some women abandoning them all together.

The Combating Sexual Harassment in Science Act of 2019 is being co-sponsored by two of Harris' fellow 2020 Democratic primary rivals, Sens. Bernie Sanders and Amy Klobuchar. A companion bill was introduced in the House of Representatives by Rep. Eddie Bernice Johnson in January.