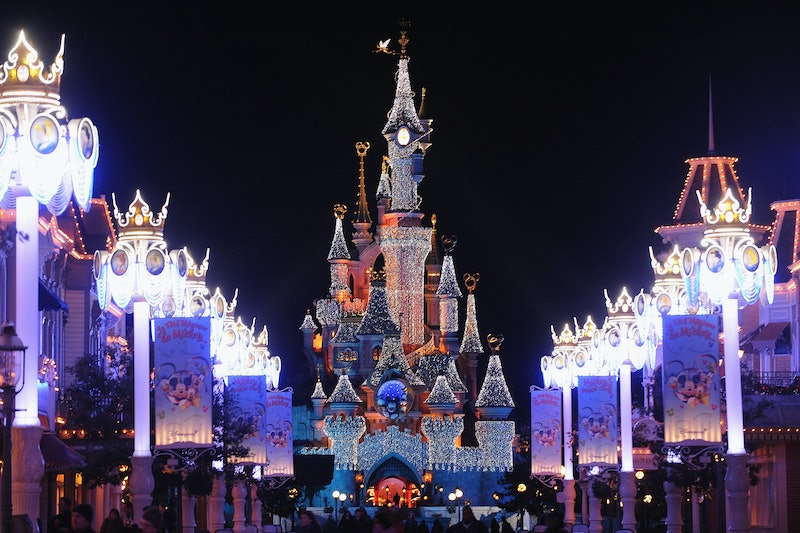 She had her bags packed, her flights booked, and her sights set on Sleeping Beauty’s castle in Disneyland. At least that’s what her Instagram caption said. In reality, Carolyn Stritch, a 32-year-old photographer and blogger from the UK, was sitting at home as she faked an entire trip to Disneyland on Instagram. With a few photo editing apps, convincing captions, and a more than captive audience, Stritch was able to fool her 190,000 Instagram followers into thinking that she took a weekend trip to California to live out an Instagram-worthy fairytale.

On March 10, Stritch posted a photo of herself on Instagram, cozied up in bed with a morning cup of tea. She’s smiling softly among her precisely ruffled white bed sheets (do all Instagram influencers have white bedsheets?) and sitting dead center between two perfectly symmetrically placed pillows. Even if you haven’t seen this exact photo, you’ve definitely seen this photo more than a handful of time in your Instagram feed.

“Tomorrow, I'm going to be 22!” Stritch’s caption read. “I'm treating myself with a trip to Californ-I-ay: I'm off to Disneyland to Instagram the hell out of Sleeping Beauty’s Castle.” She goes on to say that she’s traveling alone for the trip, “but so what? It'll be my very own fairytale. Human possibilities vastly exceed our imagination!”

The next day, Stritch posted a photo of herself in front of Sleeping Beauty’s Castle, as promised. She’s faced away, walking toward the castle, whimsically holding her dress in front of the pastel pink and blue castle. It is, in a word, perfect.

Noticeably too perfect, as some pointed out in the Instagram comments. How did Stritch manage to get a photo completely alone at Disneyland? Unlike any Disneyland photo you’ve managed to get at the most magical place on earth, she is the only person you see in the picture. No fellow tourists, no food vendors, not even a life-size Disney character is in frame in her picture.

Some were also quick to question whether you can even fly to Disneyland and back in that short of time. (Realistically? No. A flight from London to L.A. is over 11 hours long and that doesn’t account for travel time to Anaheim, where Disneyland is located.)

However, plenty of people didn’t question it too much as the photo currently over 18,000 likes.

“There I am in front of Sleeping Beauty's Castle,” Stritch’s caption reads. “My crazy, self-indulgent 22nd birthday present to myself. Tomorrow I'll be back home and it'll be like it never even happened! I keep saying to myself: it's kind of fun to do the impossible. Life is what you make it!”

In a blog post posted a few days later, Stritch shared that she’d “hacked” her own Instagram account. She shared that the pictures had been an “experiment” inspired by a heavily-edited selfie she recently posted to Facebook. Stritch edited a photo of herself in FaceApp, smoothing out lines and plumping up lips until she thought she was almost beyond recognition. “I uploaded the selfie as a profile picture on Facebook as a sort of experiment and nobody questioned it,” Stritch wrote. “Not my best friend, my sisters, or even my own mam!”

So, Stritch imagined what this “perfect” version of herself would do. Of course, she’d be 10 years younger. (The Instagram caption said Stritch was celebrating her 22nd birthday. Stritch is actually 32.) And of course, she’d be able to fly to Disneyland for the day and get the perfect Instagram photo, all alone in front of Sleeping Beauty’s castle. “I manipulated images, captioned them with a fictional narrative, and presented them as real-life,” Stritch wrote.

“I’m finishing up the second year of a degree in photography,” Stritch said. “The degree teaches that above all else we should question everything, especially our own work.”

Stritch’s recent work, while admittedly faked, is certainly impressive. The layperson would have no reason to question her Disneyland photo: the lighting is spot on, the coloring makes sense, and it certainly doesn’t seem out of place in the context of our usual Instagram feeds. Which is exactly Stritch’s point.

“I wanted my fictional narrative to challenge the way I portray myself online and the effects of this portrayal,” Stritch wrote. While she stated that this is the only time she’s lied about being in a place entirely, she does manipulate her images in other ways.“I don’t usually FaceApp my face or pretend I’ve been places I haven’t. But I never read by the window – those windows, beautiful as they are, make my flat freezing cold. Sometimes that coffee cup I’m holding is empty. I suck in my stomach. I rearrange the furniture. I photoshop out dirty marks made by bashing furniture off the walls.”

If nothing else, her project is a healthy reminder that not everything is as it seems to be online. (Also, it is definitely impossible to get a picture alone at Disneyland without the help of Photoshop.)