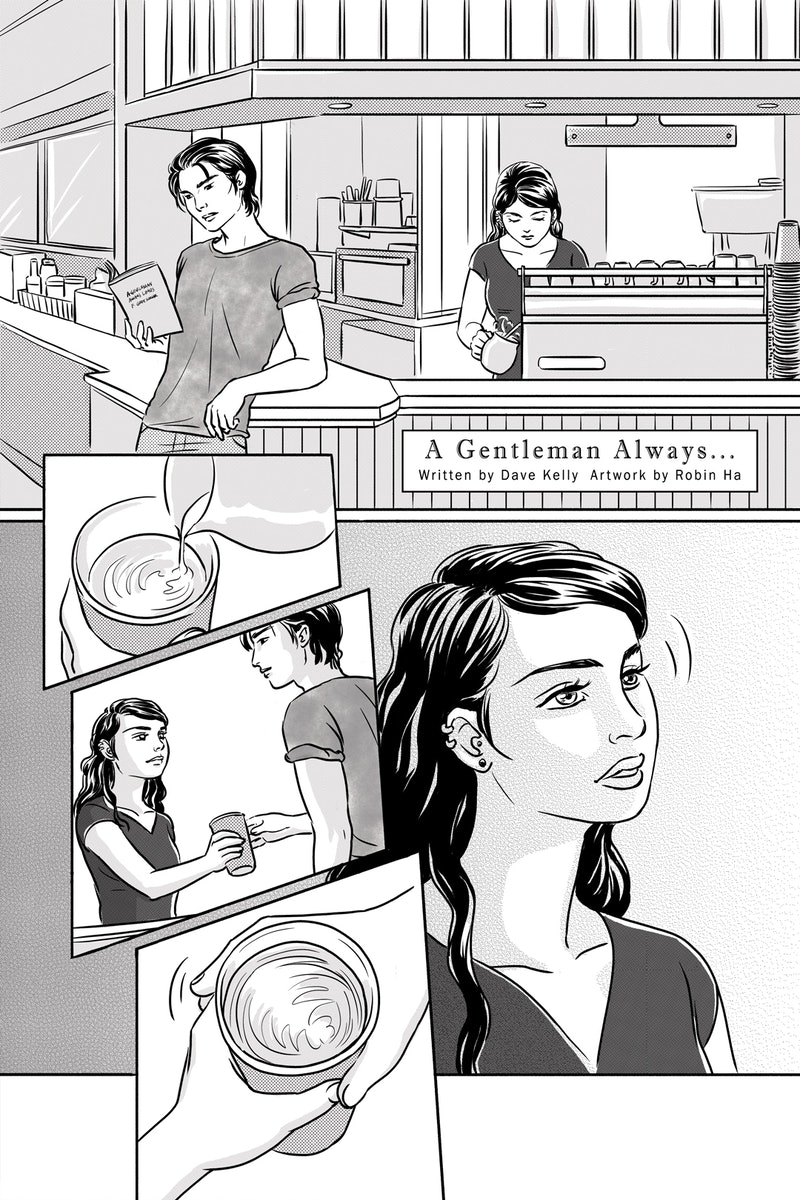 Bookstores are a sacred space for book-lovers. Especially if that bookstore also has a coffee shop. But who among us has not had the occasional daydream about getting it on with a cutie in that oh-so-sacred bookstore coffee shop? Volumes Bookcafé in Chicago is making all of your steamiest bookstore café dreams come true with their new collection, Bookstore Erotica, edited by the store’s co-owner Rebecca George alongside author Rebecca Makkai. Bookstore Erotica will be published as part of an IndieGoGo campaign to raise funds for the independent bookstore, which has recently hit some financial trouble. The collection includes fiction, poems, and comics, perfect for romantically inclined book-lovers of every kind.

So yes, that means that you can purchase a collection of bookstore erotica and also help an independent bookstore stay open to the public. I'm just not sure what more you could possibly ask for out of a book purchasing experience.

Author Dave Kelly of So What? Press and author/illustrator Robin Ha of the delightful graphic novel cookbook, Cook Korean, have teamed up to create an especially steamy short comic for the collection.

"A Gentleman Always..." follows a barista on a sensual, Not Safe for Work daydream about one of her customers. You can read an excerpt below, but for the truly graphic stuff, you'll just have to wait for Bookstore Erotica.

"I discovered Volumes about a year ago when a friend and I were in town for a wedding," says Kelly. "It was the morning after, and we were totally hung over. I love bookstores with a coffee component, and goddamn, I needed it that morning." Kelly ended up returning to Volumes a year later for a book signing, and got to know the co-owners, Kimberly and Rebecca George. "They were very cool and ever since the place has held a special spot in my heart. Oh, and they let me autograph the wall."

"I also met Rebecca Makkai, the editor of this anthology, at an artist residency last October," adds Ha. "I had a wonderful time with her there and thought I should get involved in this project."

Neither Kelly nor Ha had ever worked in the erotica genre before Bookstore Erotica, but both of them had a lot of fun wading into new territory. "The store's owners took away my innocence, and I'll never get it back," says Kelly. "It was a lot of fun, but I was worried about what kind of story to tell." His comic series, Tales of the Night Watchman, is more of an horror-mystery story, with far less adult content.

"The store's owners took away my innocence, and I'll never get it back."

Kelly was quite familiar with flirting in coffee shops, though.

"As a former barista, I know about 'coffee crushes,'" he says. "You start crushing hard and, and thanks to people's addiction to coffee, they always come back, and you almost always get a chance to act. I put Nora from Tales of the Night Watchman in that situation and explored a part of her character that has never been touched on before. The espresso machine became a vehicle for powerful female sexuality and fantasy."

Their comic in Bookstore Erotica doesn't have any dialogue, but that doesn't make it any less romantic. "I love silent comics," says Ha. "In fact, I prefer them to comics with too many words, and erotica is a perfect genre for a wordless comics. Pictures can say a lot more than words."

"Comics should be a purely visual experience. That's what the medium is all about," says Kelly "Comics are about the art as a story, not a story told through art. It's a challenge to write that way, but in the end, it’s very gratifying."

"...erotica is a perfect genre for a wordless comics. Pictures can say a lot more than words."

And for both of them, this comic and the rest of the anthology are doing a whole lot more than just getting book-lovers all hot and bothered. They're keeping physical bookstores afloat. "We need brick-and-mortar retail. We need small businesses," says Kelly. "Bookstores and comic shops are community centers where people come together in a positive way to interact, meet authors and creators they admire, and support the economy of literature."

"I think supporting small local bookstores is key to survival for all comics artists and small publishers," says Ha. "These bookstores build a community of audiences who actually care about books. No online stores can do that."

"Bookstores and comic shops are community centers where people come together in a positive way to interact, meet authors and creators they admire, and support the economy of literature."

Now that most book retail happens online, Kelly and Ha worry that book-lovers are losing a sense of connection. "The Internet can be an evil place that brings out the worst in us," says Kelly. "You see how people behave in person versus the Internet. It's completely different."

Both of them are especially invested in supporting stores run by women, and businesses that champion women and non-binary creators. "It’s really sad to see many of these neighborhood gems closing down, and it’s up to readers and creators to step up and be proactive in saving these havens," says Ha. "A world without local bookstores is not a world we want to live in."

Local bookstores and book cafés are worth protecting... even if they don't quite live up to your romantic fantasies. "Unfortunately, I’ve never had a steamy romance like this via bookstores," says Ha. "I just was not very open minded when guys struck up a conversation when I was clearly busy looking at books or working on my laptop, but this was probably why I had such a hard time finding guys to date in my twenties. Some of those guys were definitely creeps, but a few of them could have turned out okay if I had given them a chance. I’ll never know."

"A world without local bookstores is not a world we want to live in."

Kelly, on the other hand, has seen his fair share of coffee and bookshop romance. "I was a barista in New York City for many years, so coffee and romance are synonymous in my life, completely inseparable," he says. "There is something magical about café life. It's a transient and intimate space where people encounter old friends, new loves, business partners, or sit comfortably by themselves to get work done or take a load off. This mixture of energy creates the perfect playground for romance. I've seen a lot, and I'm no certainly no exception to it."

Whether you think that your local book café is the perfect spot for finding love, or you prefer to keep those fantasies on the page, you can help support one of Chicago's best loved indie bookstores and pick up a brand new collection of sultry book-loving tales with Bookstore Erotica.