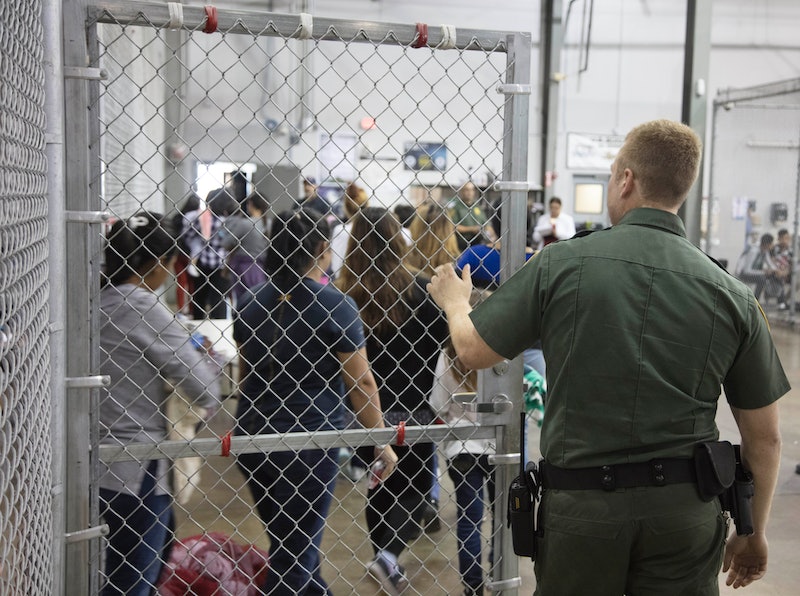 On Monday, The Hill reported, Customs and Border Protection released video of immigrant kids in a Texas detention facility, and it essentially looked as though they were being held in cages. Reporters who toured the detention facility on Sunday were initially not allowed to bring in cameras or conduct interviews, according to CBS News correspondent David Begnaud, who later posted the government video to Twitter.

The video shows reporters being herded through the facility and asking questions about what kind of people are being held there. An unnamed Border Patrol agent told the group of reporters that the facility detains "male heads of household and their children."

Dozens of children and adults are shown sitting and standing in cages of chain-link fence inside a 55,000-square-foot warehouse that had been converted for detainment, as The Hill described. While the people detained are being led around the facility, some are carrying what look like foil space blankets. In the video, you can see dozens of people laying on the floor, presumably trying to use the blankets to keep warm. There are also men (who look young, but their ages were not provided) standing behind a chain-door with an electronic keypad lock.

You can watch the full video below:

This video isn't the only insight into the current immigration crisis the public has recently gotten. On Monday, the Department of Health and Human Services also released photos of the tent facility set up for children who have been separated from their parents. The tents are in Tornillo, a border town in El Paso County, Texas. The provided photos show 10 black bunk beds in one tent. Next to some of the tents, there appears to be soccer nets. Other photos show a dozen of trailers around the tents, but their purpose has not been disclosed. The final photo, also shared by CBS News correspondent Begnaud, shows a medical tent. There's a young boy being treated by someone in a black shirt with the words "MEDICAL" across the back.

In a poll released Monday evening, CBS News found that 67 percent of Americans surveyed found it "unacceptable" that children were being separated from their parents at the border. Meanwhile, 17 percent of those surveyed viewed the policy as "acceptable." The margin of error, for reference, was plus or minus three points.

At the U.S. border, nearly 2,000 children were separated from their parents during a six-week period ending at the conclusion of May, according to the Associated Press. The Department of Homeland Security released numbers on Friday that said 1,995 children had been separated from 1,940 adults between April 19 and May 31.

Border security officials now refer all cases of undocumented entry into the United States to the Department of Justice for criminal prosecution, according to the Associated Press. And this is the policy that's led directly to families getting separated. When a parent is arrested and referred for prosecution, the child is classified as an "unaccompanied minor," Vox reported. The parent goes to jail while the child goes to a shelter run by the Department of Health and Human Services.

Even the United Nations has spoken out openly against the practice. “The thought that any state would seek to deter parents by inflicting such abuse on children is unconscionable," United Nations High Commissioner for Human Rights Zeid Ra’ad al-Hussein said on Monday, The New York Times reported. Additionally, Republicans like Laura Bush have called upon America to do better. In an op-ed for The Washington Post, the former first lady referred to the Trump administration's policy both "cruel" and "immoral." Ultimately, videos and photos, like those shared on Monday, only raise more questions about the conditions migrant children face.