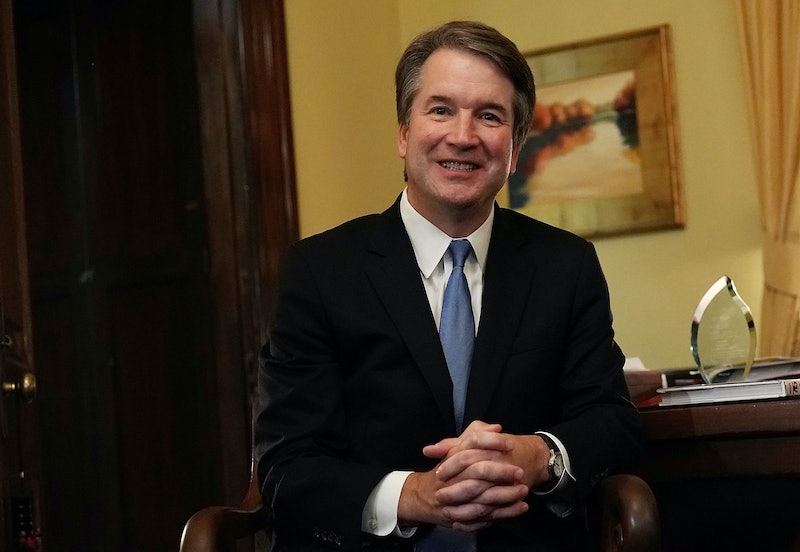 It's rare that a Supreme Court pick passes without some sort of ruckus or floor debate from the opposing political party. With President Trump's last pick of Neil Gorsuch, the weeks before his confirmation hearing turned into a political tumult. Before that, President Obama's nomination of Elena Kagan elicited anger from the Republicans, who called her progressive views too far outside the mainstream. But for President Trump's latest nomination to the top court, it'll likely be an even bumpier ride ahead: a recent poll on Brett Kavanaugh suggests he's the least popular SCOTUS nominee in decades.

Kavanaugh, a federal appellate judge in the DC Circuit Court of Appeals since 2006, has a significant record of conservative rulings and experience as a lawyer for conservative causes, according to The New York Times. But his lengthy resume hasn't seemed to help public perception of him; Kavanaugh currently has the smallest margin of support since 1987, according to a new survey.

On Tuesday, a Gallup poll found that 41 percent of Americans want to see Kavanaugh confirmed to the Supreme Court, while 37 percent of those polled want the Senate to reject his nomination, according to The Hill. The four-point advantage (the difference between those who think he should be confirmed versus those who believe he should not) for Kavanaugh is the lowest of the last 10 nominees since 1987 since Gallup started recording Supreme Court nominee data.

For Gallup's poll, 1,296 adults living in all 50 states and Washington, D.C. were surveyed. Another poll, conducted by Pew Research Center, found roughly the same numbers.

Kavanaugh's polling numbers aren't considered the worst though. Former Supreme Court nominee Robert Bork holds the honor of having the least amount of support in the poll's history, having held an advantage of six points above those who said Bork should not be confirmed when his nomination was first announced in 1987. His nomination failed.

Kavanaugh is an ideological conservative who many expect will lean the court toward the right on a variety of issues, including abortion and national security. That expectation plays into the usual Supreme Court nomination aftermath, with the yawning gap in approvals and disapprovals falling expectedly along party lines. Per the Gallup poll, 76 percent of Republicans support Kavanaugh's nomination, while 67 percent of Democrats say the Senate should reject Trump's pick. The margin of error is +/-3 percentage points.

It's not strange to see partisanship play a role in how Supreme Court picks are perceived. But, according to Gallup's data, the opposition to Kavanaugh's confirmation among Democratic Party is the highest documented to date among those "who identify with the party not holding the White House." To put it in perspective, Democrats were more favorable toward Gorsuch, who had 21% in favor of his confirmation, though the 57% who opposed Gorsuch was head on with the 57% opposition by Republicans toward President Obama's 2009 nomination of Sonia Sotomayor.

Kavanaugh's reputation is particularly sticky among independent voters, with 38 percent of independents supporting his potential place in the nation's top court compared to 37 percent who oppose it. According to The Hill, the two previous nominees to the Supreme Court, Justice Neil Gorsuch and Judge Merrick Garland (who had been named but whose appointment was never voted on), both "enjoyed the support of 44 percent of independent votes upon their initial announcements." Those numbers seemed to foretell the future, and it may foretell this one: no successful Supreme Court nominee has ever had less than 43 percent of support from independent voters.